Box-office history was busy this weekend. With Marvel’s “Shang-Chi and the Legend of the Ten Rings,” we learned that Simu Liu is an action star; that Labor Day is a perfectly fine time to open a blockbuster; and, that exhibition still has the capacity to exceed prior performance.

“Shang-Chi” opening to $71.4 million for three days with an early estimate of $83.5 million for four. It’s the second biggest opening of the year and perhaps the year’s biggest boost for theatrical fortunes. After a week when Paramount moved “Top Gun: Maverick” to 2022, the success of the latest MCU installment greatly reduces the chance of further moves. “No Time to Die” seemed certain to stay, but now Sony’s “Venom: Let There Be Carnage” has less reason to abandon its October 15 date. For Disney in the near term, there’s still the question of impact on the next Marvel release “Eternals” (November 5) and animated “Encanto” (November 24). The studio has indicated that the performance of “Shang-Chi,” domestic and not (an additional $56.2 million was grossed foreign for the weekend), will loom large in its strategy.

The success of “Shang-Chi” might seem like a slam-dunk case for theaters-only. However, “Black Widow” opened day-and-date on Premium VOD to a higher theatrical gross with an additional $60 million in revenue with a much higher return to the studio. Even so: This creates a stronger case for delaying PVOD.

The weekend’s total gross will be around $109 million, or 18 percent above 2019. Two years ago, acting upon the long-held superstition that no one wants to see movies over Labor Day weekend, there were no new releases. Mid-budget action sequel “Angel Has Fallen” spent its 10th straight day at #1, earning just under $12 million for the three-day weekend.

For 2021, this weekend created the year’s strongest overall four-week rolling comparison: It’s 69 percent compared to 2019, up from 56 percent. Next weekend, expect a significant dip; that’s when “It Chapter Two” opened in 2019.

Unadjusted for inflation, the three-day total represents the fourth biggest Labor Day weekend. Among Marvel openings, “Shang-Chi” ranks as #33 (lower, if grosses adjusted) — but “Shang-Chi” is a more peripheral Marvel character. This is also Liu’s first studio feature and his first leading role. The originality was a likely plus, as were strong reviews and the huge appeal for Asian-American viewers.

Buried in the data is that Disney, for the first time this year, is now #1 in studio box office share. Previous leaders were Universal and Warner Bros. This represents another return to normalcy: Disney, not including Fox, had 33 percent for 2019, more than double the next player. It achieved this with three of the titles playing as same-day home releases. 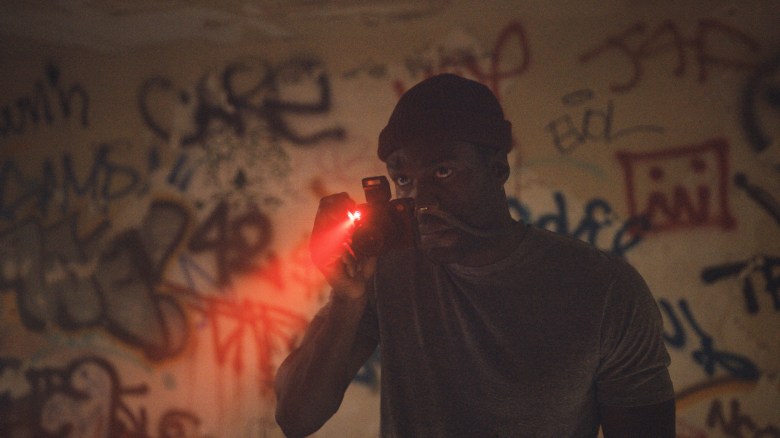 As is tradtion with Marvel releases, “Shang-Chi” represents almost two-thirds of the gross. The holiday seemed to help holdover numbers. “Candyman” is #2 at $10.2 million, is off 52 percent, less than usual for a horror title. “Free Guy” is #3, down 34 percent.

Among the five lowest drops not available at home, Ryan Reynold’s’ hit comedy is the only holdover. The evidence grows that home play doesn’t hurt box-office performance, but PVOD may bring additional attention and word of mouth that boosts theatrical performance. Sony’s “Don’t Breathe 2,” a surprise PVOD release after three weeks, fell only 23 percent. “Black Widow” and “Jungle Cruise,” long-running and also PVOD, dropped even less. “PAW People,” also on Paramount Plus, had a smaller second-weekend drop than the theater-only “Candyman.”

On the specialized front, no new titles released grosses and holdovers represented a tiny fraction of overall attendance. The fate of this sector depends on the performance and strategies of the multiple acclaimed films that are now premiering at Venice and Telluride.

The Top Ten (all grosses for three-day Friday-Sunday period)