What’s it like to be universally beloved? “Shawn Mendes: In Wonder,” an adoring slice of unabashed hagiography from Netflix that documents a year in the life of the 22-year-old Canadian pop sensation, doesn’t know the answer, but sure tries to capture the experience. With more than 17 million record sales, nearly 26 million Twitter followers, and twice that many on Instagram, Mendes has an immeasurable fan base the world over and, at least according to Grant Singer’s new film, he appears to handle his status as contemporary pop’s infallible dreamboat well. He’s such a walking, beaming ray of positivity despite the onus of fandom that it’s almost amazing, and at times exhausting. While “In Wonder” lacks the drama and revelation of other recent pop-music X-rays like “Katy Perry: Part of Me,” “Gaga: Five Foot Two,” and “Taylor Swift: Miss Americana,” it could provide a sweet salve for viewers beaten down by the year from hell.

Fans, of course, will eat this one up right from the start. “In Wonder” opens with Mendes, muscly and pensive, shown from the waist up in the shower. But eagle-eyed viewers might notice the bright red rings speckling Mendes’ back — traces of cupping therapy, a practice so du jour among celebrities with limitless access to the market of self-care.

Filmed before the mayhem of 2020, “In Wonder” sometimes comes across as utopian to the point of being tone-deaf. It’s skin-deep access, pushing viewers up against the glossy outsides of the bubble of someone who earned $38 million in 2019 alone. Singer’s film is more an extended promotional reel than the anatomy of an artist, and that lack of depth and disarmament feels just a bit out of step at the end of a humbling year for celebrities. Or, it’s crashing relief for people who just want to feel better. Take your pick.

It’s inevitable that the cosmic levels of fame surging Mendes’ way might turn poisonous, but the Canadian heartthrob has mostly kept his image and personality intact, unlike some of his peers (including a certain fellow Canadian) who’ve tumbled into scandal, and crumbled under the spotlight in wild and tarnishing acts of public spectacle and self-destruction. Mendes, even in peril-adjacent moments like the mere hours before a massive concert in Portugal when he realizes his voice is giving out, is a sunny-side-up, glass-half-full kind of guy. You almost wish something bad would happen in the under-90-minute runtime to break up the endless joy. (It doesn’t.) 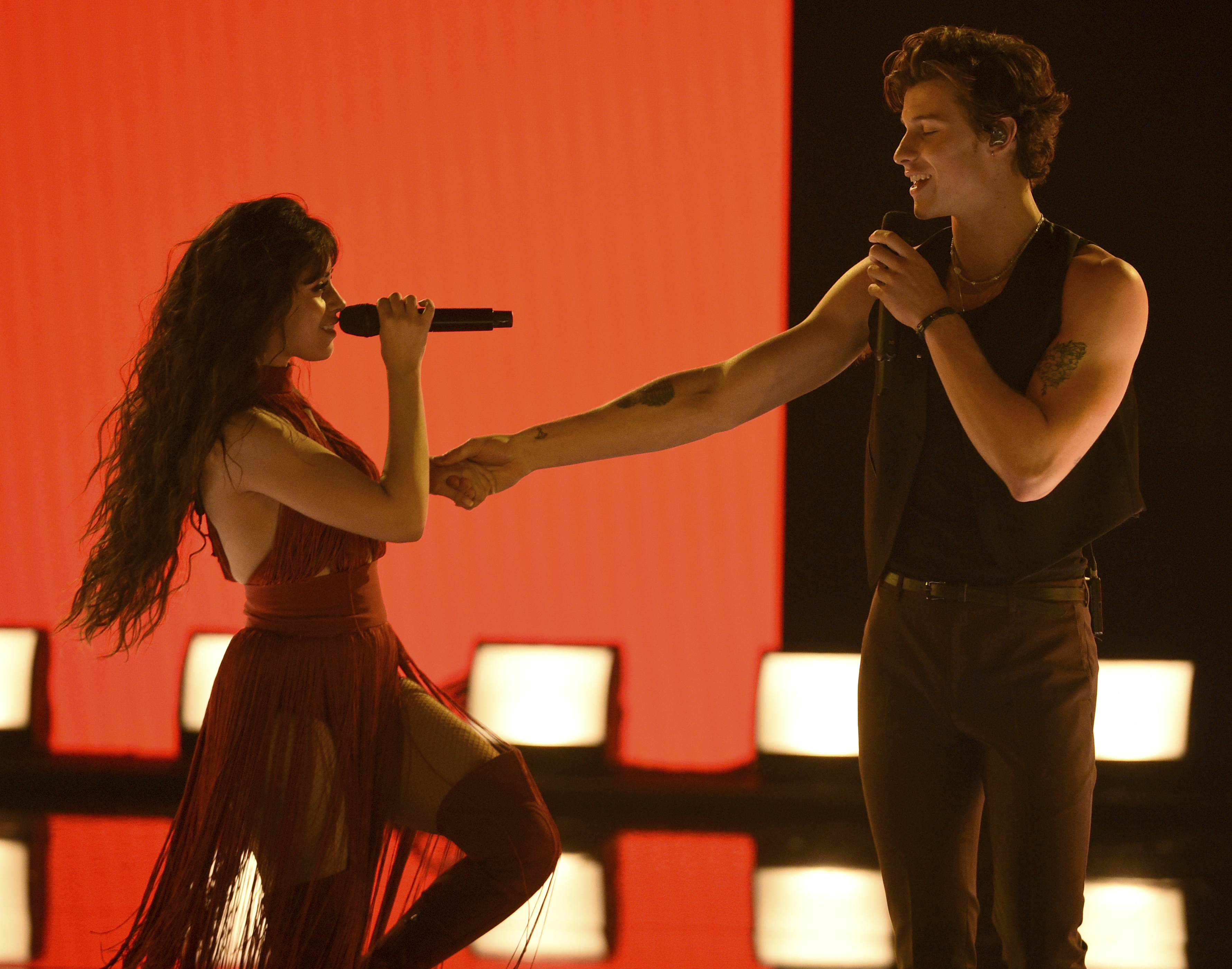 Gossip vultures will tune in to possibly get a fuller glimpse at the relationship between Mendes and singer/songwriter Camila Cabello, whose steamy “Señorita” duet sent the internet into hysteria last year. Then there was that onstage kiss at the 54,00-seat packed Rogers Centre in Toronto in September 2019, followed by another but far more outrageous and sloppy liplock they released on social media in a masterful feint of trolling.

The hot pair then became a running joke during the early months of the pandemic, captured by paparazzis on stilted strolls that felt calculated, but also again like an act of trolling, this time with a more jaded edge on the dead-eyed item’s part. (That’s probably, many are cynically inclined to believe, because a team of a zillion people backstage were pulling the strings to drum up publicity.)

Footage behind the scenes in the lead-up to that now-iconic Toronto concert embrace captures a jittery Cabello pacing the stage, curiously at a distance from Mendes, who’s tuning his guitar. Stolen moments between the pair, including at his luxe apartment overlooking the Toronto skyline, are blocked and shot almost like something out of Terrence Malick at his most self-parodying — awkward, encircling, and vibrating with enough hesitation to give the sense of an emotional gulf between them, but also a gaping desire to get closer despite the schism drawn by fame. Mendes and Cabello, much like the filmmakers and their material, for the most part keep what resembles a safe social distance before that was even a thing.

Those expecting a bombshell dossier of their much-publicized romance will, predictably, be disappointed. Mendes in voiceover sounds at ease talking about their attempts to ground a routine over the course of a summer together, “making eggs and trying to figure out how to use a Keurig.” Normal couple stuff. In a short one-on-one with Cabello, she describes the arc of their romance as “that fucking saga,” coy to say too much but clearly exhausted by the attention.

The center of “In Wonder” is not that tabloid saga, but Mendes himself. He’s full of energy, and impressive even on the small screen, reveling onstage for his stadium-filling public of screaming (mostly) tweens, bellowing anthemic pop bangers whose catchy hooks send a surge of serotonin straight to the dome. You’d have to be stone inside not to be slightly charmed. He’s an earnest performer and person on and off the stage, and the version you’re getting in the limelight is, as this documentary wants to say, the real deal.

That’s not to say Mendes still doesn’t haul plenty of neuroses and insecurities from his halcyon days as a teen YouTuber spinning acoustic tunes out of his bedroom. Mendes’ “manifestation journal” — filled with scrawls of repeating, self-affirming mantras that bring to mind “All work and no play makes Jack a dull boy” — opens an honest, if foreboding door onto a performer who occasionally has to psych himself out to keep it together. He also gets wistful about the bygone times of his Ontario upbringing, and how he sometimes just wants to get high with his friends and eat jerky in the park.

While those days aren’t dead, they’re certainly more complicated to achieve now. “If I tell the world I am a normal human, will they stop listening to music?” Mendes wonders. The pop icon’s stardom is so etched in concrete at this point that he could tell his fans just about anything and they would never stop listening. So it’s a pity that the documentary vehicle that surrounds him isn’t more forthcoming about the man beneath the wife beaters and airtight skinny jeans who sends so many swooning, but surely must, at times, feel lonely late at night like the rest of us.

“Shawn Mendes: In Wonder” premieres on Netflix on Monday, November 23.