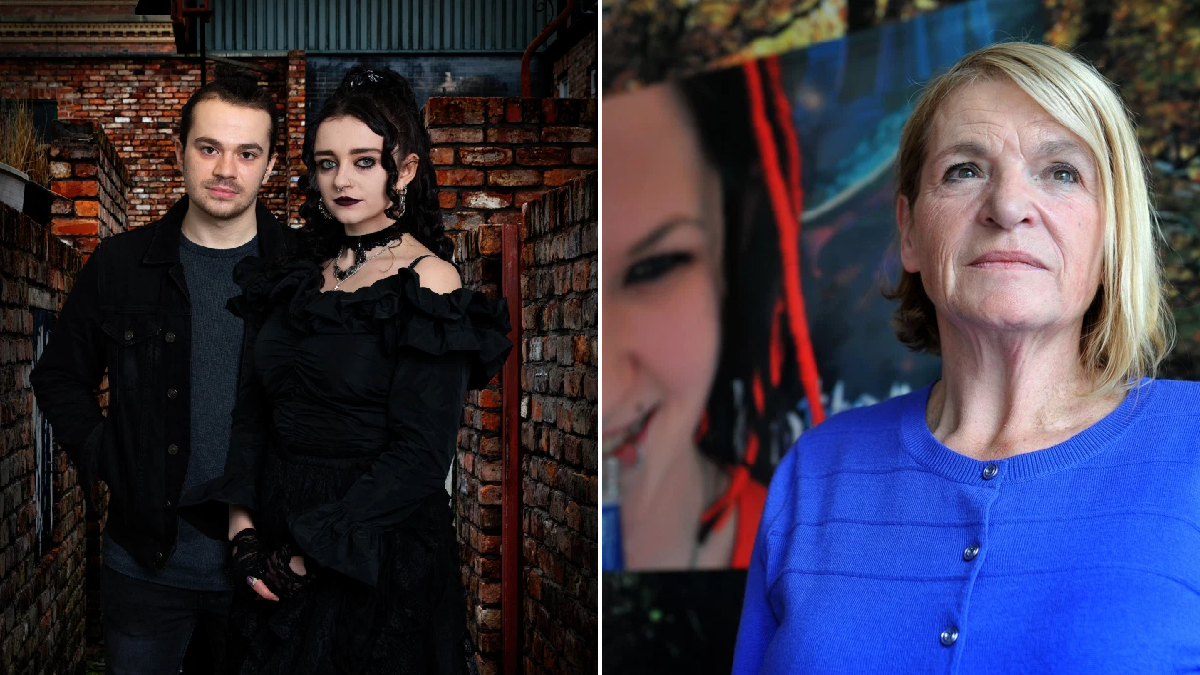 Coronation Street are currently looking at the subject of hate crime through an intense storyline that saw Nina Lucas (Mollie Gallagher) and Seb Franklin (Harry Visinoni) attacked simply because of the way they looked.

In scenes that aired during Wednesday’s edition of the ITV soap, Nina and Seb came across Corey Brent’s (Maximus Evans) drunken gang. As the couple ran away, the gang gave chase and Nina and Seb found themselves subject to an unprovoked and vicious attack.

Exploring social intolerance and prejudice often suffered by people from stigmatised minority groups, Coronation Street have been working with The Sophie Lancaster Foundation throughout this storyline for advice and guidance.

Sophie and her boyfriend Robert Maltby were attacked in a park back in 2007 because of the way they looked. As a consequence of the attack, Sophie died from her injuries and now her mother Sylvia has set up the foundation in her daughter’s memory.

The foundation focuses on creating respect for, and understanding of, subcultures and communities.

As the aftermath of Seb and Nina’s attack begins, Sylvia Lancaster recently spoke to Metro.co.uk and other press, where she discussed the importance of this hate crime storyline as well as how she feels to have a similar story to Sophie’s depicted in Corrie:

‘What people don’t understand is that there’s a split really. There’s a professional part of it and there’s a personal part. As much as I can I keep on the professional level, but it isn’t about me at the end of the day, it’s about that message and the importance of getting that message out there. It’s massively important and alternative people like other minorities deserve to walk down the street without being abused, whether that’s physical or emotional.’

What was your reaction when you were asked to help with this storyline?

‘I got an email from Corrie saying, “we’d like to speak to you” and I was shocked, I didn’t believe it! Obviously all of us at the foundation were so thrilled to bits, the experience has been very professional, very well looked after, obviously we understand that Coronation Street are very sensitive to issues so we knew as Corrie they would do a good job. At the end of the day, that’s part of it all, it has to be done with sensitivity and also help people see the reality behind the story, and I think Corrie are particularly good at that.’

Have you been pleased with Mollie’s portrayal of Nina?

‘Yes! It was lovely to speak to Mollie and to also see she’s quite alternative in real life. I think interestingly what has happened is, people have taken Nina to their hearts which is lovely to see because obviously people are looking behind the image, and seeing Nina as a person which is a massive thing. Underneath all of this, these people are the same as you and I.’

Have you enjoyed seeing Seb and Nina’s relationship develop?

‘Yes, I saw someone say ‘are we having a Sabina’ which made me smile.’

Talk to us about the moment you found out Sophie and Robert had been attacked:

‘I couldn’t believe it. Why on earth would someone want to attack a girl who was so kind and caring, it just didn’t make any sense. And Rob as well, he was a very creative and sensitive soul and I think that’s your initial reaction “what on earth?” and “will they be okay?” it’s very confusing really and hard to process.’

The police with Sophie’s story and Seb and Nina’s don’t make the assumption that they’ve been attacked because of how they look.

‘That’s right. At the end of the day they have to try and dig into the reasonings. They need to know to piece everything together and it’s quite intrusive, you’re trying to protect rather than let people in, you don’t want people to know.’

You used to watch Coronation Street with Sophie and she had a favourite character?

‘There was a young guy on called Spider and he was an eco-warrior. I can see him as vividly as anything, Sophie adored him, everything about him; what he stood for, what he looked like, who he was. She loved him.’

How would Sophie react that you’re now working with Corrie?

‘I think she would be astonished! We would’ve been giggly about it I think.’

What is your ethos for the foundation? What did you set it up to achieve?

‘The big thing has always been about education. We developed an educational resource and we take it to schools and use it with young people, we work in prisons, universities, we work at festivals too, the main part is the education with young people. We have been hit by Covid like everyone else, we worked a lot behind the scenes and digitalised things to make resources people can use online. Although we haven’t been visible, we have been busy.’

What are you hoping from this storyline?

‘If people don’t report, there’s no figures we can use as a lever to go forward with the alternative sub-cultures and hate crime. We do need people to report, the education is massive, the whole generation that’s coming through may not know Sophie’s story, it’s major that we attach onto these young people and work with them. It’s really important we get our message across.

We talk about consequences of actions, impact, not just the victims families but the preparators family too. It’s an honour to use that in schools.’