The Netflix Korean drama Squid Game has raised many questions that fans want answers to. One of the most trivial questions happens to be the simplest. The guards in the K-drama have inspired Halloween costumes, toys, and merchandise. The characters became infamous for their bright jumpsuits and masks. There is now a debate on whether the guards’ jumpsuits are bright red or dark pink in Squid Game. It might be a lighting trick, but director Hwang has the answer.

Who are the guards in ‘Squid Game’?

Most of the main characters in the K-drama have a backstory that fans clung to throughout the storyline. Seong Gi-hun (Lee Jung-jae) becomes the hero of Squid Game who originally joins after gambling away all his money. The drama tells the stories of a North Korean defector, a Pakistani immigrant, a gangster, a con woman, a man who lives his life based on a lie, and a mysterious old man.

Squid Game leaves certain characters in the dark. Besides the Front Man, fans know absolutely nothing about the guards. In the K-drama, only a few faces of the guards are revealed. Fans never get information about them. They do have their storylines. In Squid Game, some guards banned together to illegally trafficking the organs of the players who have died. Who the guards are behind the masks still remains a mystery.

The guards’ jumpsuits are actually pink

In multiple interviews, Hwang and the creative director have revealed the actual color of the guards’ suits is pink. The lighting in Squid Game and images make the suits look a bright red. In an interview with Vulture, Hwang explains the creative concept behind the costumes.

“The pink jumpsuit was designed to conceal as much of the workers’ identity as possible and still allow enough room for movements. We used the color pink to remove signs of hostility and match the colors of the fairy-tale-like set,” said Hwang. In a behind-the-scenes interview, Hwang again confirmed he picked black and pink colors to represent the guards. He even jokes that it is like the K-Pop girl group BLACKPINK.

Hwang is aware of fans’ comments comparing the guards’ suits to the suits in Money Heist. In the end, the director wanted the guards to look like an ant colony with masks and have uniformity with the suits. 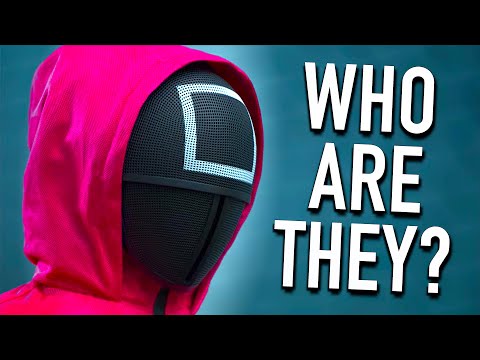 Director Hwang announced a second season of the K-drama is already in the works and under negotiation with Netflix. He teased some minor characters to make their return, and Gi-hun will again play a lead role. Fans have their own expectations for a second season.

Some fans wish to see the backstories of the guards in a Squid Game Season 2. K-drama fans want to especially know if they are picked just like the players. Fan theories suggest that a guard and a player are picked depending on their color when playing the childhood game Dakji with the Salesman.