Spoiler alert! Do not proceed if you have not watched the season 4 premiere of Station 19.

Station 19 took us right back to the tense reunion between Andy Herrera (Jaina Lee Ortiz) and her once-presumed-dead mother, Elena (Patricia de Leon), and if there was ever a time for sparks to fly… well, now was that time. After coming back into Andy’s life unannounced in the season 3 finale, Elena had some explaining to do. Like, what did Pruitt know, why didn’t she ever come back and what was she doing during the 20 years she was gone?

As Andy learned during their verbal sparring match, her mother was suffering from mental illness — feeling all sorts of depressed, sad and ashamed — and chose to up and leave when Andy was just nine years old. Elena ended up fighting fires for two years in New York City, and after 9/11, Pruitt even tried to get her to come back home to no avail. Perhaps most disconcerting was her lack of desire to apologize to Andy for abandoning her in the first place, the lie that she had died an off-the-cuff idea Elena threw out to Pruitt as she was walking out the door.

“I’m definitely interested in a woman who abandons her child at nine and stays out of her life for decades and then suddenly comes back and barely wants to apologize,” director and executive producer Paris Barclay tells ET. “That’d be pretty irreparable.”

And as the firehouse contends with the coronavirus, other characters within 19 saw their fair share of hiccups. From Dean’s awkward realization that he actually loves Vic to Andy and Sullivan’s temporary 90-day breakup to Travis’ uncomfortable discovery that his dad is on a gay dating app, there’s a lot more drama ahead for the firefighters of Station 19 with the season now in full swing. ET hopped on the phone with Barclay, the executive producer and director of Thursday’s premiere, to get the scoop on what’s to come.

ET: What was the most challenging thing about reframing this new season with the pandemic at the forefront?

Paris Barclay: As we were preparing for the season the first month or so, we just really talked about safety and how we can protect the actors and protect the rest of the crew in this environment. So a lot of it was just setting up the protocols. As the unions were negotiating, we tried to figure out what we could do to keep our whole crew and cast safe. And then we got the word that [Grey’s Anatomy and Station 19 showrunner] Krista [Vernoff] had decided that COVID would be a part of the story and that we would embrace it. We actually breathed a sigh of relief, because that allows our actors to actually be in masks in many instances and to be protected naturally, because that’s the environment. And when they go out, extras would be in masks if they were in certain places. And so, it just helped us to just create the show in the real world. I mean, this is the season that’s going to be the most real because of it, because we’ve embraced COVID and also, it’s going to be the one that’s going to be the most safe. We haven’t even had anyone get the flu so far this season. Knock on wood that keeps up.

The premiere really filled in some blanks about Andy’s mom and what she’d been up to in the 20 years she was presumed dead. Are we just scratching the surface with that particular storyline? It seems there’s so much more to unpack there with that relationship.

Yeah. I think it’ll always be a part of Andy’s story. What happened with her mom, how Pruitt dealt with it, how she grew to accept it and to even, I think, love Pruitt more by the end of the episode will be a part of our story. But we’re not going to continue to flash back to that. We’ll touch on it through Andy’s character and tell you more and more about that [in the present].

It’s only been three weeks since their tense reunion. What will it take for Andy and her mom to reconcile? Is that even in the cards or is that something you’re interested in exploring?

I’m definitely interested in a woman who abandons her child at nine and stays out of her life for decades and then suddenly comes back and barely wants to apologize. I mean, I can just imagine if that happened to me, that’d be pretty irreparable. And so, the impact of that will continue to resonate on Andy’s character and on her psyche. 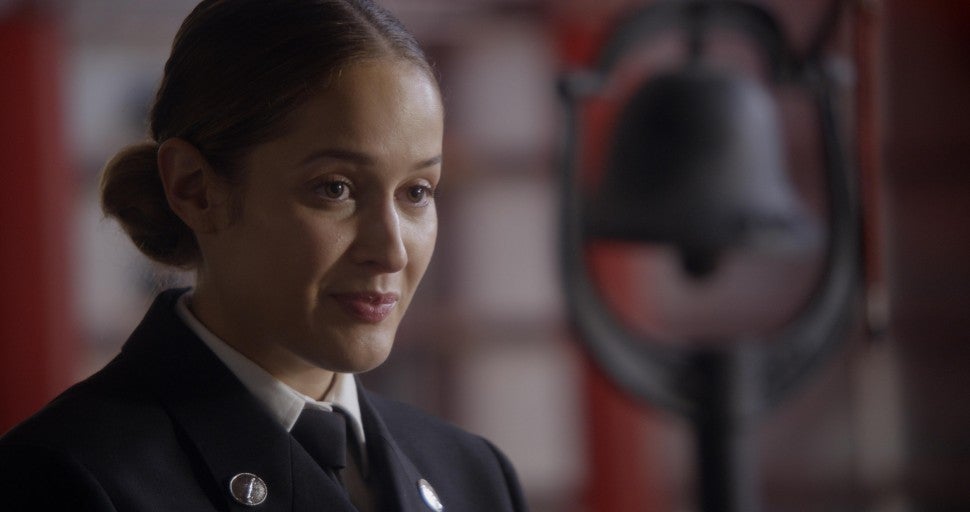 In terms of Andy and Sullivan’s marriage, they decided to separate for 90 days as he goes through his recovery process. What obstacles await them as they try to accomplish this goal? It’s Station 19, so I’m assuming it’s not going to be easy…

(Laughs.) How did you figure that out? It’s going to be a struggle. Whenever you’re forced apart, when you want to be together, it’s going to be a struggle. And Sullivan has to find his own way. He has to find where he’s going to work and how he’s going to fit in. And Andy has to continue with her job too, and deal with the pain of the loss of her beloved father and the struggle with her mother. The both of them have a lot going on in their own lives, and maybe it’s advisable that they do it apart. But because they love each other, they want to be together and they want to support each other through what each is going through. That’s going to be the tension that weaves in. We’re in episodes 5 and 6 now. The tension continues. They’re still trying to work out how it all will play out.

Sullivan is also currently jobless. What are the chances that he makes his way back to 19 in some capacity? What is his professional outlook?

It has to be difficult if you’ve actually been at least accused of a felony. He hasn’t been tried and adjudicated of one yet, so there’s still going to be a process by which decides whether or not he is officially off the force forever. There’s still that coming up for him. But right now, he’s in limbo. Right now, you’re right. He doesn’t really have a job. He threw his gear down at the feet of his partner and walked away. But the good thing about Sullivan is he’s resourceful, and he’s strong, and he’s skilled. And when you have as many skills as Sullivan, and charm is among them, you may be able to find your way.

Dean comes to this realization that maybe he is actually in love with Vic, but she’s moving out and moving in with Travis. Dean even says he knows “what he has to do now.” Can you give us a hint as to what he means?

I can’t give you a hint, but if you look at Dean’s character, you see that he’s made a choice. He’s made a choice to protect his family and to protect his friendship with Vic. He’s making affirmative, positive choices. He’s not trying to hurt anybody. He’s trying to do what’s best for his family of him and Pru, but also his family at Station 19, which involves not getting into a relationship with Vic, he believes. He’s going to continue to struggle with that. And that’s going to be a really interesting arc for him and Vic. Whether or not they get together, you’ll have to stay tuned.

Four seasons ago, I definitely would not have pegged Jack to be the voice of reason, especially when it comes to matters of the heart. Is this new Jack here to stay?

You’re onto something there. I think what happens in Krista Vernoff’s world and the world of her writers is everyone has to grow. Some people grow farther away from who they appear to be and some people become more of what they appear to be. Jack is one of those people who’s grown farther away from what he originally appeared to be, into something that actually has a considerable more understanding. What he’s been through in dealing with his foster childhood and dealing with the relationships that he’s had and actually getting into therapy with Tracie Thoms’ character, you can see that he’s starting to change and to grow. And you’re seeing that he may be becoming the voice of reason over time. He may be becoming increasingly less like the Jack of yore and more like someone who understands that it’s time to grow up.

There was a seed planted in the premiere that he may be on to a potential new romance. Will he find love?

It’s such a good question, but as you know from watching your Shondaland shows, love is very difficult to find, and what appears to be love sometimes isn’t always love. Part of the interesting thing about Jack this season is, is it real or is it just Memorex? As we used to say in the olden days. Jack has been through so many different relationships and some of them have been very quick and most of them have been unfruitful. The question is, does he really want to dive into another one? And does he really want to take that risk again? And even if he does, is it the right situation to be in? As Jack grows, that’s going to become increasingly complicated. It used to be super easy for him just to do it. But nowadays, as he gets more mature, having those relationships that he’s had with reckless abandon has become increasingly difficult. I certainly hope he finds love though, because I root for Jack. And my sons; I have two teenage sons. They root for Jack too. So I can tell you that, at least in my family, we hope that Jack does find love.

Stefania Spampinato also moves over to Station 19 full-time from Grey’s. What value does the character of Carina add to the show, especially with her relationship with Maya?

The two of them light up the screen, as we like to say. The two of them have an undeniable chemistry that really, really becomes central heating in the show. And I like to watch them. A lot of people like to watch them together. Bringing her over to Station 19 is a win-win for both of us, because she could still appear as the obstetrician she is in Grey’s, and she can still be seen in her relationship with Maya. It gives us this great flexibility to have more of her. She’s a terrific actor, and I don’t think I’ve ever done a scene with her where she’s disappointed me in the least. We are over the moon to have more of Maya and Carina on our show. It’s going to be to the joy of the audience.

To stay up to date on breaking TV news, sign up for ET’s daily newsletter.