[Editor’s Note: The following interview contains spoilers for “The Boys” Season 2, Episode 6, “The Bloody Doors Off.”]

As is the proper attitude toward anyone with an overly curated social media presence, it turns out fans were right to be leery of Stormfront. While the writing was on the wall since Season 2 first premiered, “The Boys” has dropped bombshell after bombshell about the newest member of its corporate-sponsored, morally bankrupt superhero team, The Seven.

First, she appears as if from nowhere, already approved by the powers that be (namely Vought CEO Stan Edgar, played by Giancarlo Esposito) to join the most exclusive club on the planet. Then, she gleefully murders Kimiko’s brother, revealing both a love for seeing “the light go out” every time someone dies and an internal racism driving this particular kill. Soon enough, she’s outed as a full-on white supremacist (originally known as Liberty), but it’s not until Episode 6 that series creator Eric Kripke unveils Stormfront’s most twisted secret.

She’s a Nazi. An actual WWII-era Nazi. Her wedding photo includes a swastika flag, her husband was a leader in the Third Reich, and she had drinks with Adolph Hitler himself.

Such a revelation is a lot for the audience to process, which means there’s even more for the actor to wrap their head around. Fortunately, “The Boys” snagged Aya Cash for the part, a sharp, introspective artist best known for her work in “You’re the Worst” and “Fosse/Verdon.” Engaged with social issues and wary of social media (she left Twitter years ago), landing the role of Stormfront was never just another gig. It’s a role loaded with controversy, as America sees white supremacist ideologies bleeding into the mainstream and social media playing a big part in its dispersion. Only adding to the complexities of playing a Nazi in 2020, Cash is also Jewish.

“So I knew she was a Nazi,” Cash said in an interview with IndieWire. “I knew that was going to be the arc of the season, but I didn’t have any actual scripts to read or any information about how that unfolded. So when I auditioned, I had some dummy sides from basically the first meeting of Homelander and then an interaction with Starlight.” 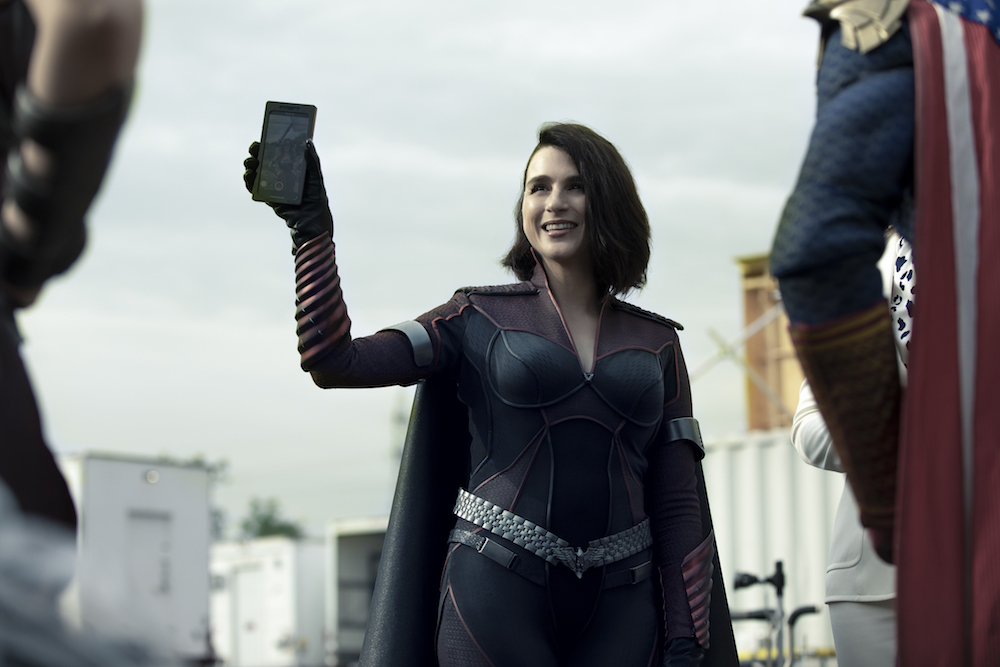 Aya Cash in “The Boys”

The backstory could be gleaned from the original comics, where Stormfront was also a Nazi, but Cash knew the responsibility involved with accepting the part. Any discussion of Nazis in popular culture carries risks, and like a satiric land mine, Stormfront could blow up the show as well as its star — if done poorly.

“There is truth in my responsibility of playing this character,” Cash said. “I don’t get to just say, ‘Oh, this is just a job. I’m just doing my job.’ I actually don’t think that. I would not take a job where I didn’t feel like this kind of character was in service of something else — [if] it was glorifying this [person] or holding this person up as someone to admire. So even though we may like her or may be charmed by her in the beginning, I needed to know that it was in service of something; that it was being thought deeply about […] because I don’t write the show, so I want to make sure I’m in good hands.”

A “smart” and “thoughtful” conversation with Kripke helped ease those worries. Still, “The Boys” operates on the razor’s edge, given its intense brand of satire, and the subjective nature of art means ensuring success is all but impossible.

“It’s one of those things where you can have all the best intentions and still fuck up and get it wrong. And that’s a scary thing,” Cash said.

For her part, Cash said the scenes where Stormfront exacts vengeance on people of color were particularly eye-opening.

“I understand there are going to be people who are like, ‘I don’t need to see more Black and brown bodies hurt right now. I don’t want to watch that,’” Cash said. “We are watching that every day in our news, so I understand it can also be tender for people right now. I was worried more that crazy Nazis were going to take me on as some sort of hero. I was less thoughtful about the actual violence that I am doing onscreen [which could] cause harm to people watching who are dealing with this right now. And that was a good lesson for me.”

As Cash mentioned, Stormfront can be pretty convincing. Early in the season, before she’s revealed as a hate-fueled murderer, she lures Starlight (Erin Moriarty) into a friendship, and the audience can see how and why she’s recruited so many online followers, fans, and “soldiers” — Stormfront offers plenty of sentiments just about everyone can get beyond, which is exactly what makes her so powerful.

“The way white supremacy is couched these days is not necessarily in the obvious way it was in, say, the ’40s or even the ’60s,” Cash said. “It’s much more insidious now in our culture, and it’s couched in, ‘We believe in free speech,’ and ‘We believe in authenticity,’ and ‘Fuck the system!’ And yet the ideology is the same.”

“It was important to make her not necessarily likable, but someone that you could relate to; that you could say, ‘Yeah, I believe that,’” she said. “Whatever side of the political spectrum you are, there is a lot of distrust in the system and the fake corporatization of social issues. Her saying [as much] is almost universal. Everyone can relate to that. And I think that makes her even scarier.” 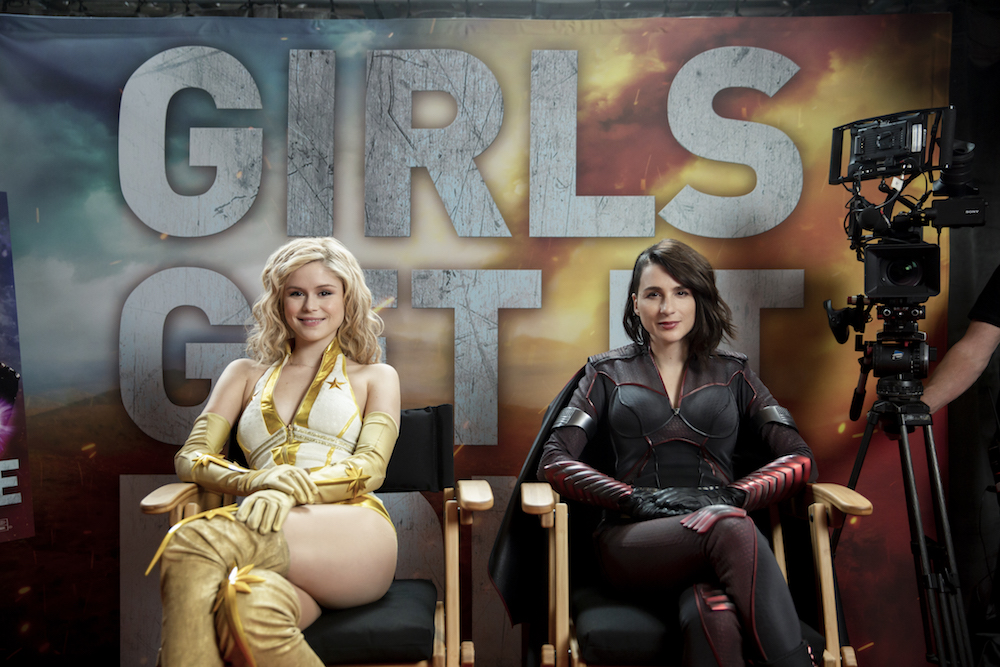 Erin Moriarty and Aya Cash in “The Boys”

Cash emphasized that just because her character is ultimately evil, it didn’t nullify certain sound points she makes. These moments made it easier for her to connect with the character, and whether Stormfront was calling for women’s super-suits to include pockets or telling fans not to buy her cheaply manufactured action figure, it’s OK to admit Stormfront got one right.

“‘Even a broken clock is right twice a day,’” Cash said, quoting the popular phrase. “Sometimes we don’t give enough credit to that. I feel like when I look at certain politicians and I see them do something good, there’s a resistance to even acknowledge it — because it’s dangerous [to acknowledge them], but it’s also dangerous to not acknowledge it; if you’re not willing to agree with people who may be coming from a completely different place than you [but still agree], then it makes any criticism weaker and it makes people trust you less.”

Ultimately, Stormfront represents a broader truth about the United States. Wielding the power and influence she’s culled from social media, the supe relies on new technology for an old cause: white supremacy. For decades prior to the 2016 election, Americans thought that kind of racism was a sin of the past, vanquished during the war and the continued progress thereafter. But just as we’ve learned over the past four years, Nazis are very much alive and carrying torches — just like Stormfront herself.

“The Boys” could help expand that level of awareness. As an action show with superheroes at its center, Amazon Prime Video’s original series appeals to a wide viewership base. Many who start watching may not realize its political and topical commentary until they’re already absorbed in the story. But Cash isn’t sure if its messages about stealth white supremacy and the dangers of social media are connecting with unaware audiences or only bouncing around the woke echo chamber.

“I would love that this kind of show — with this kind of large audience and this much fun action and this many big fight scenes — I would love if it does at least start the conversations around this stuff for people,” Cash said. “I would love it if they begin to think deeply about these issues and engage with that in our society because I do think that is what will change our world for the better, even if it’s not right away.”