Already watched The Chair? Have thoughts about that twist in the finale? The cast of the Netflix original series does too. Taylor Holland, the actor who plays Professor Joan Hambling on The Chair, recently shared how she feels about that surprise ending even Sandra Oh’s Dr. Ji-Yoon Kim didn’t see coming.

[Spoiler alert: This article contains spoilers from The Chair Season 1 Episode 6: “The Chair”]

Who is Professor Joan Hambling on ‘The Chair’? 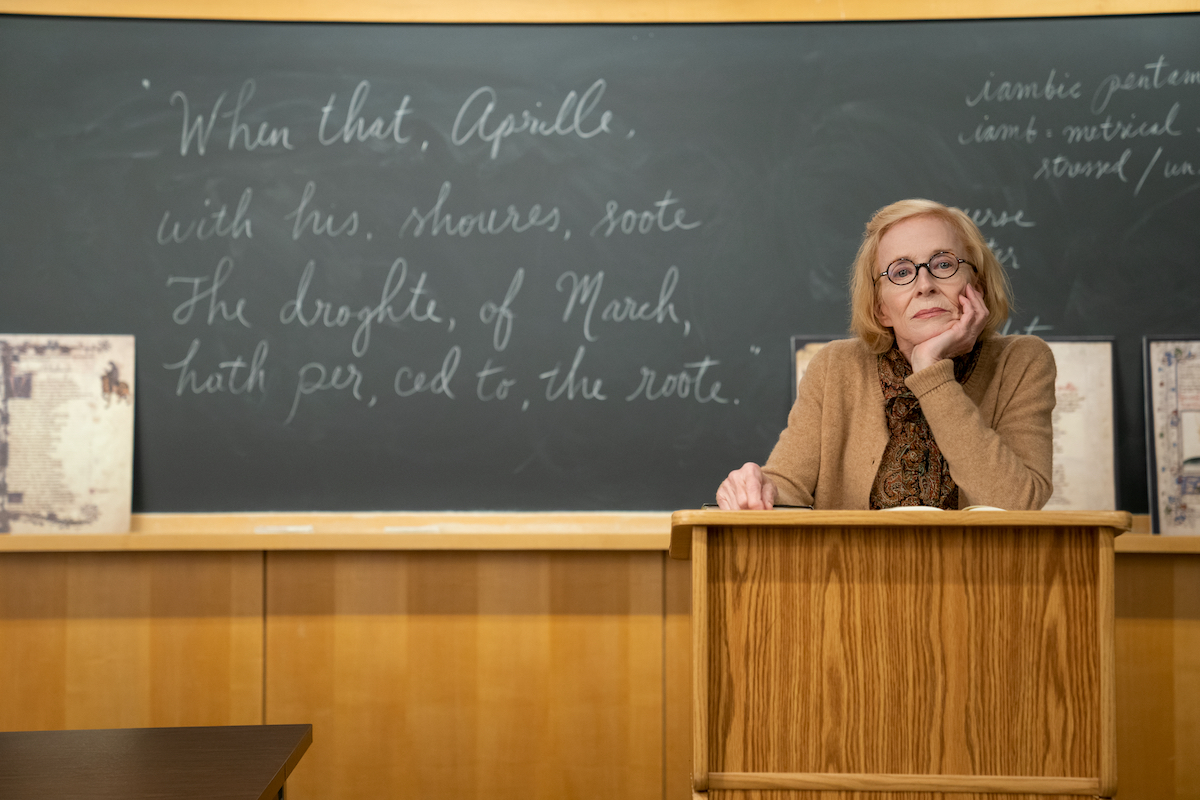 Holland’s character is a distinguished professor at the fictional and prestigious Pembroke University. She’s a longtime faculty member in the English department and enrollment in her courses is seriously low. Dangerously low to where the dean, in no uncertain terms, tells Ji-Yoon that she should consider letting Joan go.

When The Chair viewers first meet Joan she’s concerned about her new office. As a long-ago tenured professor who has been at the university for decades, she’s concerned that her new office — in the dingy basement of the campus wellness center — means her days as a university professor are numbered. So she enlists the help of Ji-Yoon, her pseudo-mentee, colleague, and friend.

While Joan worries about the future of her career in academia Ji-Yoon encourages her to review her student evaluations. Joan doesn’t want to, saying it’s simply a popularity contest.

Caution, there are major spoilers ahead about The Chair ahead. For those who haven’t watched season 1 look away or learn how season 1 ends.

In an August 2021 interview with Vulture Holland discussed that twist in episode 6. Her character replaced Ji-Yoon as chair of the English department. How does Holland feel about Joan getting the job?

“The ending is quite wonderful, I think,” she said. “Well, I’m a literal person, and I thought there was a wonderful redemptive quality to it and a reward.”

Holland continued, saying Joan has the experience to succeed as the head of the department.

“The chair’s job is not really academic, it’s also practical, and political, and human. That’s the kind of thing she’s been doing throughout her career, having to handle people arrangements and things that the department needs to do,” she said of Joan.

“In a sense, she’s rather equipped to be chair. It also gives her agency. How long she might have it, who knows, but we all need a certain machinery to exercise our talents and ability, and she has a position and a job to do, which will exercise her fully, and that has to be wonderful for her to experience,” Holland added.

As for what happened when Joan was named chair. Holland says “probably everyone in that room who would vote said, ‘Oh, Joan will be a great chair. She knows how to do all that other s—!’”

Taylor Holland on the possibility of ‘The Chair’ Season 2

Joan’s in and Ji-Yoon is out. The ending clearly left an opening for The Chair to continue. So how does Holland feel about Joan’s future in a potential season 2? She hasn’t “daydreamed” about it because, as the Legally Blonde alum told the outlet, things are so uncertain in the industry.

As for the writing, Holland praised showrunner, writer, and executive producer Amanda Peet.

“Amanda as a writer is really extraordinary. I know her other writing. I’ve seen a couple of her plays and read one rather closely. And the thing that’s remarkable about her writing is that it sometimes seems like a transcription of real life. It’s like overheard conversations. When I read the scripts, I just thought, ‘Oh, I can’t wait to do this.’”

See Holland in all six episodes of The Chair Season 1, which is streaming on Netflix.