The Curse of Oak Island Season 8 finally hit our screens last night, and it was a premiere like none we’ve ever seen before.

It appears that as the guys were preparing to recommence digging last March after the winter break, their operations were ground to a halt when COVID-19 began making its way across North America.

The main problem the Fellowship of the Dig faced was the travel restrictions imposed on the US/Canada border, which meant the majority of the team, the Laginas included, couldn’t make it to the island.

In fact, Rick and Marty never even made it to the island at all in the first episode. They got real close; they could see the island from where they were quarantined on the mainland.

Luckily, the guys had a team on the ground the whole time. Doug Crowell and Steve Guptil were joined by Laird Niven, Dr. Ian Spooner, and Charles Barkhouse, and these guys wasted no time getting to work.

The guys began putting to use the new technology that we’ve been promised, and the first thing they did was send a diver down the C1 shaft to look for gold coins.

A couple of days beforehand, the guys had sent a camera down the shaft, and the footage had shown what looked like gold. The diver was tasked with retrieving the gold.

Unfortunately, the diver was unable to retrieve any gold; at one point, we thought he had a gold coin, but, agonizingly, he dropped it down the shaft.

The team then turned their focus to Lot 15, an area not far from the fabled Money Pit. They believe there might be a tunnel underneath Lot 15 that could lead directly to the Money Pit, and they’ve already uncovered a mysterious stone-like structure in the area.

At this point, Laird announced an exciting new addition to the Oak Island team.

Archaeologist David McGinnis will head the excavation at Lot 15, and he’s got quite a claim to fame; he’s a direct descendant of Dan McGinnis, the man who initially found the Money Pit back in 1795.

And he discovered evidence of smelting at Lot 15, which led the team to suspect that there was a large smelting blacksmith shop on the spot, possibly using a tar pine kiln from the 16th or 17th century.

The guys believe that the Lot 15 blacksmith shop probably ties in with the wharf previously discovered at Smith’s Cove and the swamp’s raised platform.

They just don’t quite know how to connect the dots.

Gary Drayton’s find of the week

Metal detectorist Gary Drayton, and his enthusiastic helper, Jack Begley, finished their quarantine and arrived on the island and wasted no time breaking out the fancy new metal detector.

This new piece of equipment can locate any cavities and tunnels that are beneath the surface. However, their first sweep failed, and they only got some hits when Gary broke out his old and trusty detector, the CTX 3030.

Lo and behold, they quickly stumble upon an ax head. It’s heavy, it’s old, and Gary thinks it might be a rigging ax. But their most exciting find was still to come.

In Gary’s first ‘top pocket find’ of the season, he and Jack unearthed a coin.

Just like the ax head, Gary believes it to be old. Examing the shape and patina of the coin, he reckons it’s the 1600s or 1700s. Intriguingly, he doesn’t think it’s from Europe, but he doesn’t say where he does think it’s from. 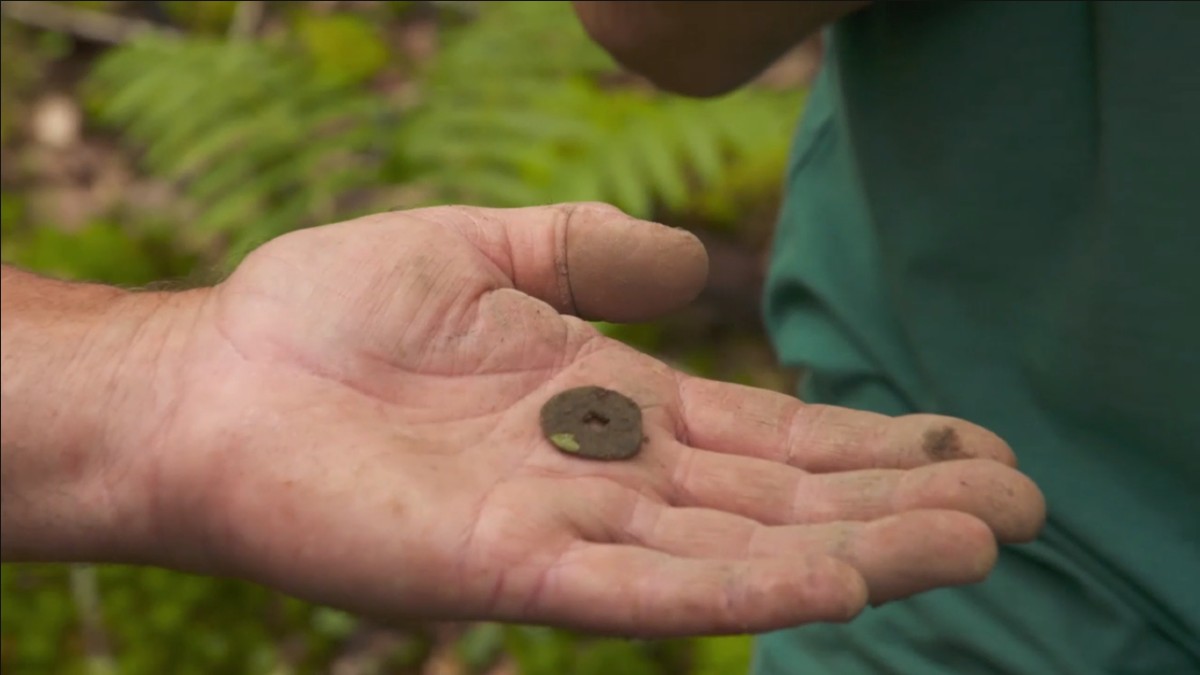 Gary and Jack raced back to the War Room to jump on Zoom to tell Rick and Marty about their find. But then Gary suddenly changed his mind, revealing that he wanted to wait until the Lagina’s were on the island before showing them the coin.

This was a strange episode of Oak Island and mostly featured the guys trying to come to terms with the COVID-19 pandemic; however, with the quarantines coming to an end, we can expect to see the whole team on the island next week.

Which means they can really get started on excavating.

All the guys seem to have a renewed excitement and determination. And it seems very likely that this year will be their year.

We’ll leave the last word to Gary Drayton himself. On taking over The Curse of Oak Island Twitter feed last night, he ended by assuring us, “it only gets better!”

The Curse of Oak Island airs at 9/8c on History.