TV’s revolving door of true-crime miniseries kept spinning on Tuesday, with the three-episode arrival of Hulu’s The Girl From Plainville.

The eight-episode drama, which stars The Great‘s Elle Fanning, chronicles the death of Conrad Roy, a teenager who died by suicide in 2014. The titular girl here is Conrad’s then-girlfriend, Michelle Carter, who was tried for involuntary manslaughter after seemingly encouraging Conrad to end his life in their extensive text message history. (For those unfamiliar with how the trial shook out, I’ll let the show fill in those details.)

In the first of the three episodes that landed on Hulu Tuesday, Conrad’s death takes place in the opening minutes; after his mother Lynn (Chloë Sevigny) files a missing persons report for Conrad, police later find his body in his pickup truck at a Kmart parking lot, where he died from carbon monoxide poisoning after leaving a water pump running inside the vehicle. When Michelle gets the news later that morning that Conrad has died, she walks like a zombie into the kitchen where her parents are, near tears as she reveals, “Conrad’s dead.” But her mother’s response to that bombshell is rather unexpected: “Who’s Conrad?”

Throughout the premiere, you continue to get the sense that although Conrad and Michelle were clearly very important to each other, no one else even knew they were in close contact, let alone allegedly dating. They lived an hour apart from each other in Massachusetts — he in Mattapoisett, she in Plainville — and only actually met up in person once or twice, as Conrad’s best friend Rob later tells the police. 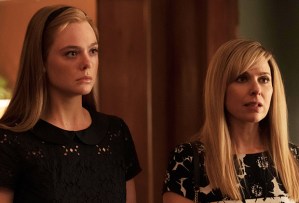 And then there’s Michelle’s increasingly odd behavior after hearing of Conrad’s death: When a couple of her friends (I use that term loosely; these girls clearly aren’t Michelle’s biggest fans) come over to console her, she abruptly goes from shaking and sobbing to earnestly picking out the perfect funeral dress. She’s furious to discover that Conrad’s family scattered his ashes without her, even though Lynn and Michelle had only just met for the first time days earlier. And she’s consistently defensive about her relationship with Conrad, though her dad tries to gently point out that Conrad’s name never once came up in conversation before he died.

Near the end of Episode 1, Michelle’s mom hints that these strange antics have happened with her daughter before. She suggests that Michelle “go to see the doctor again,” which appeared to help last time Michelle went through a phase of bizarre sulking and yelling. Michelle waves her mom off, though, and says she’s still taking the pills she was prescribed last time. (That’s as much intel as we get in the premiere about Michelle’s history with mental health problems.)

Meanwhile, as Michelle and the Roys grieve, the local Fairhaven Police Department is starting to look into Conrad’s suicide, and the evidence against Michelle seems damning from the start. For one, as lead detective Scott Gordon (Billions‘ Kelly AuCoin) discovers, the only text message history that existed on Conrad’s phone at the time of his death was his conversation with Michelle — and all messages from before the night he died have suspiciously been deleted. In Michelle’s final texts to Conrad, she’s concerned and begging to hear back from him, and the last message is especially curious: “I thought you actually did it.”

After presenting those red flags to a colleague, who agrees that Conrad was hiding something, Gordon obtains box after box containing hard copies of Conrad and Michelle’s text exchanges. There’s also an iPad in those evidence files, where Conrad recorded a video of himself talking about his struggles with anxiety and depression. 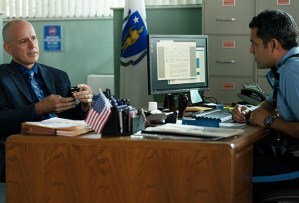 As Conrad’s sobering video diary plays, Gordon scans through pages and pages of those text messages, and they get increasingly stunning. Conrad and Michelle often talked about their respective mental health issues, including Conrad’s desire to die and Michelle’s eating disorder — but near the end of the message history, more and more texts from Michelle pop up along the lines of, “Okay so are you gonna do it?” “Are you gonna do it today” and “The time is right.” And eventually, Conrad texts her, “Good night. See you in the next life.”

It’s really the premiere’s final scene, though, that illustrates Michelle’s unbalanced personality. She faces herself in her bedroom mirror and starts reciting what you think might be a eulogy of sorts for Conrad. But no: She’s actually performing, word for word, a scene from Glee‘s heartbreaking “The Quarterback” episode, when Lea Michele’s Rachel mourns Finn and sings “Make You Feel My Love” in his honor. At first, Michelle messes up Rachel’s exact quotes, then brings the scene up on her computer. As it plays, she says all of Rachel’s lines and song lyrics verbatim this time, periodically breaking down in tears as she and Rachel simultaneously sing. And though it seems like Michelle might really be hurting at times, it’s ultimately unnerving to watch her recite this scene to herself — and after Rachel’s song concludes, Michelle looks up at her reflection and gives a small, satisfied smile.

OK, your turn. What did you think of The Girl From Plainville‘s first episode? And will you continue watching? Cast your votes in our polls below, then hit the comments with your full reviews.

If you’re thinking about suicide, are worried about a friend or loved one, or would like emotional support, call the National Suicide Prevention Lifeline’s toll-free number: 1-800-273-TALK (8255)