FANS are gearing up for the return of The Handmaid's Tale as it approaches VERY soon.

Here's everything you need to know about series three of the hit show. Stop reading if you don't want to know any **spoilers**… 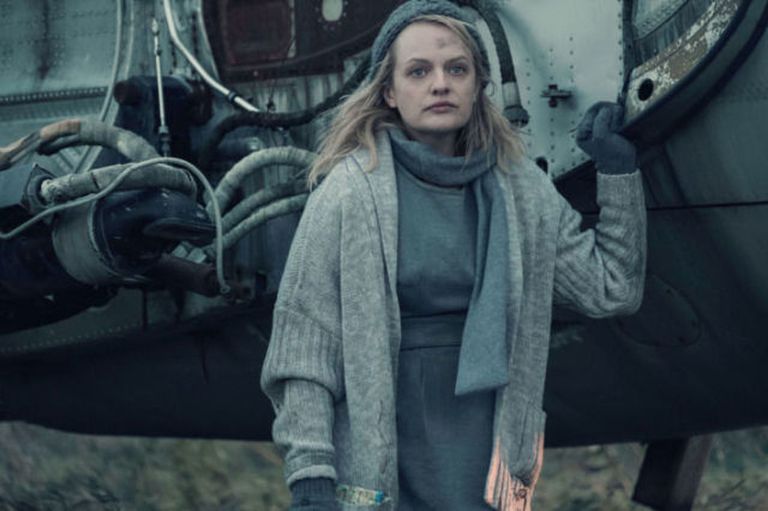 When is The Handmaid's Tale series 3 out in the UK?

An official UK start date for the third series is yet to be confirmed – though we do now it is being released on June 5 on US streaming site Hulu.

And if the latest season is anything like the second then we can expect it will air in the UK a few weeks after the States.

Last year season two aired on Hulu at the end of April.

And then followed suit in the UK on Channel 4 on Sunday, May 20.

So we may have a few more weeks to wait yet…

Who is in the cast of series 3?

None of the main characters met their death at the end of season two so we can expect to see the following:

Before this, Elisabeth was seen as Zoey Bartlet in the political drama, The West Wing.

She also starred as Polly in Girl, Interrupted alongside Angelina Jolie and Winona Ryder.

She is most famous for her role as Rory Gilmore in the long-running series Gilmore Girls.

In 2016 she returned to the series for a Netflix special, Gilmore Girls: A Year in the Life.

Alexis has also appeared in several films including Sin City and Sisterhood of the Travelling Pants.

In 2013, she starred in the short-lived US remake of Gavin And Stacey, renamed Us and Them, playing Stacey opposite Jason Ritter as Gavin.

He also starred as the corrupt Monsignor in American Horror Story: Asylum.

In 2016 he received criticism for his portrayal of Michael Jackson in the later pulled episode of TV series Urban Myths.

He is a British actor and the son of director Anthony Minghella.

In 2005 he made his film debut in Bee Season which starred Richard Gere.

He is a British actor who has starred in the series Grownups and Material Girl.

In Doctor Who series 4 he played River Song's ill-fated crew member Other Dave.

In 2016 he starred in The Five – a crime drama about a missing five-year-old boy. 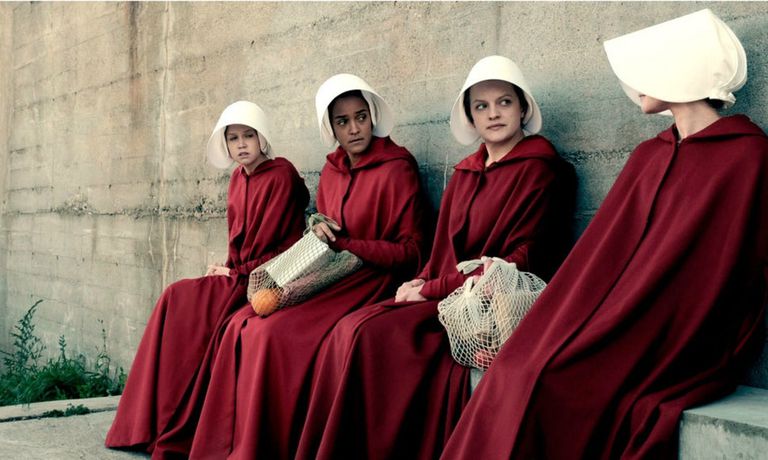 She is best known for playing Poussey in the Netflix series Orange Is The New Black.

She has also appeared in films including Nerve and The Sitter.

Ann Dowd, 63, as Aunt Lydia – the character survives the brutal stabbing she suffered at the end of series 2.

She has appeared in several films including Green Card, Garden State and Marley & Me.

In 2012 she won a National Board of Review Award for Best Supporting Actress in Compliance.

She has also been in TV series such as The X-Files and Freaks and Geeks.

He attended the Julliard School for drama and was a member of "Group 14" alongside Thomas Gibson.

He has also appeared in films such as Billy Madison and Get Out. 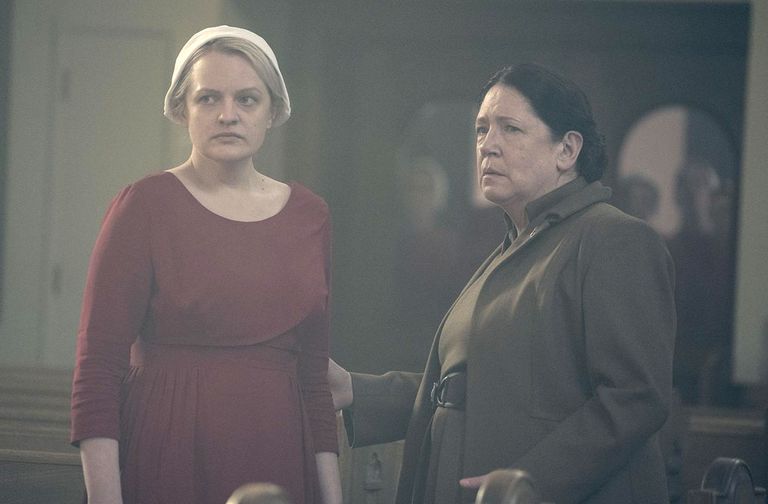 She was born in Paris and went to drama school in Pittsburgh, US.

In 1995 she won the Tony Award for Best Actress in a Play for the revival of The Heiress.

She has also appeared in films such as Whiskey Tango Foxtrot, alongside Tina Fey, and New Year's Eve.

But we did however say goodbye to Eden who was killed off in the second to last episode.

What do we know about series 3 from the trailer? 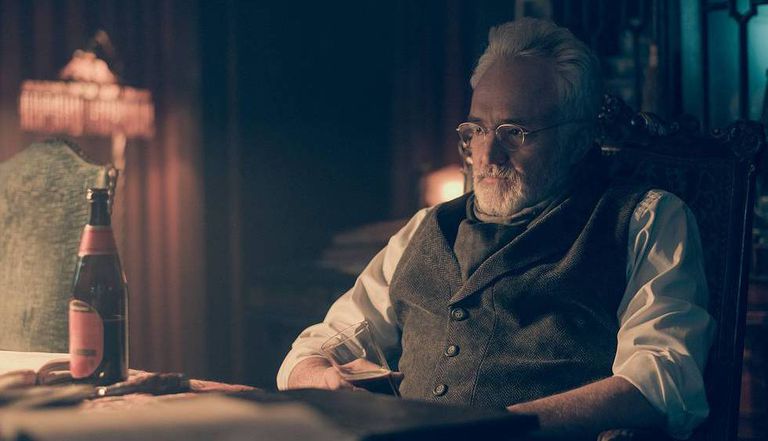 In the new trailer we see June and and Serena appearing to work together – and even sharing a fag break together.

This follows the final episodes of series 2 when Serena gives June her blessing to bust Nicole out of the restrictive republic.

Elsewhere there are jumpcuts in the trailer to suggest that Serena may take advantage of her social status as Commander Waterford's spouse to help the resistance internally.

And the trailer also seems to point towards Nick as another ally of June's – suggesting she's managed to maintain a good relationship with the father of her daughter Nicole.

Ad in a shock return, Aunt Lydia is back.

That's right, from the looks of the trailer she didn't succumb to Emily's stabbing at the end of series 2.

Or could it be that she is just a flashback and is actually dead?

No, she really is back, showrunner Bruce Miller confirmed: "Aunt Lydia doesn't die, [but] she's transformed by this event. The fact that one of her girls… has literally stabbed her in the back. "

The trailer also brings back characters Rita and Commander Lawrence for season 3.

Bradley Whitford – who plays Commander Lawrence – told THR that viewers can "expect to see more" from him.

And hinted that the character will continue to play a central role in the resistance, he said:

"He's a character that was modelled after some of the academics in Germany (during World War II), who had come up with a lot of the plans and did calculations

"For Lawrence, he feels like an architect of a system that in a lot of ways broke his wife, and (that) makes him feel sick to his stomach."

The actor also suggested that there will be even more evil characters joining the storyline:

"There are bigger players, (and) Fred Waterford is not the biggest fish in that pond," said Executive producer Warren Littlefield. "It's a little bit of Gilead on steroids."

But it's not all doom and gloom, Littlefield said there is hope for some of leading characters:
"I think there are a lot more rays of hope in the battle that we'll be feeling and experiencing in season three…

"Against some overwhelming (odds) there is a sense of purpose and a sense of light in that tunnel."

Plus the trailer itself offers hope when Nicole and Emily are seen free after Emily arrives safely in Canada with the little tot.

Littlefield sums it up by saying: "What we're seeing is that some of the philosophy and strains of Gilead are even bleeding up into Canada."

What else have the shows bosses said about season 3?

Exec producer Warren Littlefield revealed to USA Today that June will walk back into Gilead – as the new series picks up ten minutes after the finale of season two.

He said: "We'll also pick up with Serena Joy (Yvonne Strahovski) and where is she, what happens to her with the knowledge that Nicole, who she considers her baby, has gone off to Canada, but not with June.

"And so that has really far-reaching ramifications, and Nicole becomes a multinational (interest). Everybody wants Nicole.

"And the question is who legally and morally presides over that."

And showrunner Bruce Miller is adamant that the series will continue to stay true to the original Margaret Atwood novel. He said:

"I roughed it out to about 10 seasons when I was first working on it. I see a world beyond [the current one].

"I would watch an episode about the Nuremberg trials after Gilead falls. There are lots of worlds you think of.

"But my arc is still very much the arc of the novel, which is the arc of this one woman's experience in Gilead at this time

"And her recollections that paint this picture of what it was like and what the experience of this world was like, which really is still the book.

"People talk about how we're beyond the book, but we're not really.

"The book starts, then jumps 200 years with an academic discussion at the end of it, about what's happened in those intervening 200 years.

"It's maybe handled in an outline, but it's still there in Margaret's novel.

He hasn't revealed too many of the specifics of what will happen in season three but he said: "The season is about resistance – June resisting and June fighting. After a couple of seasons of being beaten down, she’s had quite enough. She’s finding ways to rebel."