The series premiere of The Haunting of Bly Manor wasted no time in sending chills up the spines of Netflix subscribers across the globe. As teacher-turned-au pair Dani Clayton (played by Victoria Pedretti) arrives at the picturesque mansion to look after Wingrave children Miles (Benjamin Evan Ainsworth) and Flora (Amelie Bea Smith), she’s instantly faced with a series of weird goings-on. Most of these bizarre occurrences stem from Flora and Miles’ suspect behaviour but when the latter tries to freak his new nanny out even further, one fan’s pointed out a glaring production mishap.

Dani’s first night in Bly Manor wasn’t exactly an easy one in the very first episode of the series.

Despite being seemingly welcomed by the Wingrave children, housekeeper Mrs Grose (T’Nia Miller) and cook Owen (Rahul Kohli), Dani’s demons of her own made it tricky for her to settle.

Add to the mix bizarre behaviour from both kids and a stern warning from Flora not to leave her room at night, and Dani’s stay was destined to be an uneasy one.

And fans got their first sight of the ghostly goings-on in Bly Manor when Dani disobeyed Flora’s pleas and made herself a midnight cup of tea. 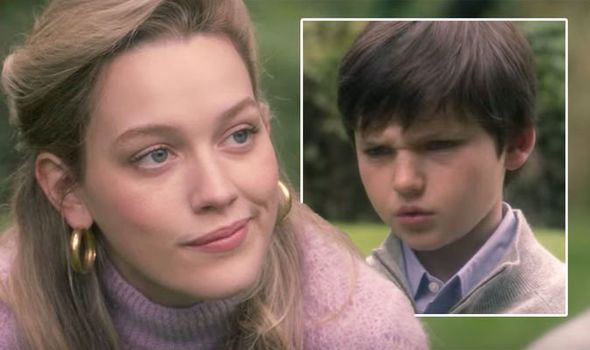 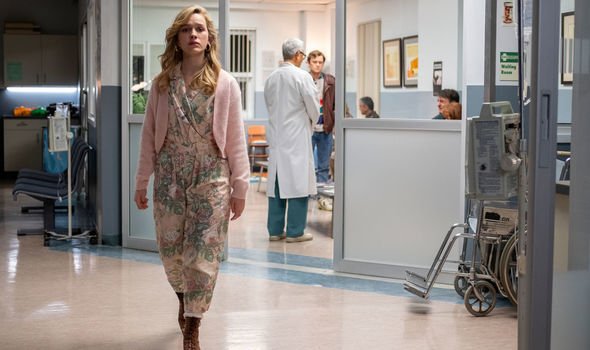 As she returned to her room, suspicious movement from a cloaked figure sent chills through Haunting of Bly Manor fans.

However, it’s a scene from the very next day between Dani and Miles which has caught the eye – and not because of its thrill factor.

Dani accompanied the children for a walk around the ground of Bly Manor, heading towards the stunning greenery.

Miles ran off from Flora and Dani as something caught his eye, leaving Flora to scold her new aupair for leaving her room the night before. 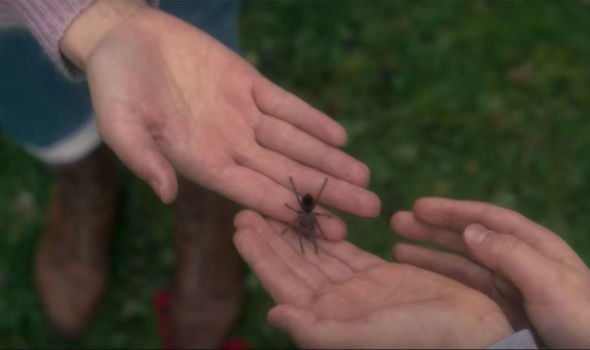 Flora warned Dani the “lady in the lake” may have caught here but the two are soon interrupted by Miles holding a creepy-crawly.

With a spider in his hand, Flora is creeped out and runs away but Dani stands firm and gives Miles a telling off.

“I’ve been a teacher for nine years, Miles,” she told him. “That’s almost your whole life and in that time a lot of kids have tried to scare me in a lot of ways.”

Dani began to handle the spider, and told the youngster: “I’m a lot braver than people think, including me.”

Dani handed back the spider to Miles but at this point, a piece of red tape can be seen underneath her shoe.

And the marker left so actor Pedretti knew where she was going was enough of a blunder to distract some viewers.

One took to online forum moviemistakes to point out the blunder: “When Dani hands the spider back to Miles,

“After he uses it to scare Flora (and) just after she says ‘including me’ and the spider moves from Dani’s hand to Miles’ hand,

“A red tape marker can be seen on the ground right under Victoria Pedretti’s left foot.”

Upon a rewatch, it is clear to see that the tape is perfectly visible beneath the actor’s foot.

However, it appears this is the only time in the series visible equipment from the production does make its way onto screen.

The Haunting of Bly Manor is available to stream on Netflix now.