Television has a long memory, and for the cast of Beverly Hills, 90210, it leaves an inescapable bind – sometimes good, sometimes bad – that is perhaps only wholly understood by the casts of shows who find themselves bound to a similar fate, such as The Brady Bunch or Star Trek.

Like their co-stars, actresses Jennie Garth and Tori Spelling, who played Kelly Taylor and Donna Martin on the high school drama, are bound together, for better or worse. “For life,” Garth says. “Can’t get rid of her,” Spelling adds. 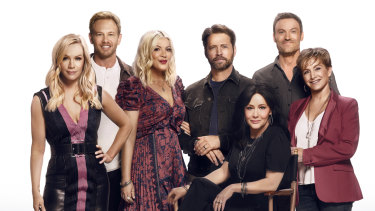 Rebooted but barely a day older: the cast of 90210.Credit:CBS Studios

“I have to be honest, we felt that way, like we were a family, and then life took us in different directions,” Spelling says. “We’re super close in real life but because life takes you to different things, people would always say, why aren’t you in touch and there wasn’t even a reason.

“Brian [Austin Green, their 90210 co-star] and I didn’t talk for 20 years, the show ended and things just went different ways, there was no reason,” Spelling adds. “I always thought, I’ll run into him one day, but never did. So it was so nice to be brought back together. Fate keeps bringing us back together.”

Fate, and the vagaries of a television business which is rarely happy to let a hit show rest, let alone one which did what Beverly Hills, 90210 did: 10 seasons, 293 one-hour episodes and two spin-offs, Melrose Place and Models Inc.

Now, like a post-modern hybrid of The Brady Bunch Variety Hour and This Is Spinal Tap, the cast of Beverly Hills, 90210 have been reunited for BH90210, a scripted satire of their real lives, in which they play themselves collectively dealing with a network plan to reboot their hit show. 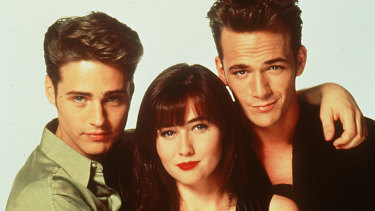 The way we were: Jason Priestley, Shannen Doherty and Luke Perry.Credit:CBS Studios

The development of BH90210 was driven by Spelling and Garth, but nevertheless it took some time to bring the entire cast around to the idea that the show would satirise both the actors themselves and the past real-life headlines which had surrounded them.

Spelling agrees, though she notes that when the headlines were at their worst it was a case of adapt or be defeated. “I had to roll with it at some point,” Spelling says.

“Back in the day people would have false perceptions about me, and all of us, and we couldn’t do anything about it because there wasn’t social media, there were no platforms like there are now,” she adds.

When the original series premiered on October 4, 1990, in the US, the cast were all in their 20s and had little understanding of the scale of either the show’s success or how it would impact their lives. When it ended, after a decade on top of the ratings, re-adjusting to civilian life was just as jarring, says Garth.

“I don’t think any of us had any grasp of what would happen after that,” she says. “We worked so much during that time that we couldn’t really appreciate or understand how big it was until we were kind of outside of it a little bit and could look back and be like, oh my god, that was pretty major.”

It was like one of the lines in the BH90210 pilot episode which refers to the actors as animals let out of a zoo, Garth adds. “That’s for me how I felt, living in that sheltered bubble for so long. I had to learn all the things that I had missed out on, so it was a little bit of arrested development,” Garth says. 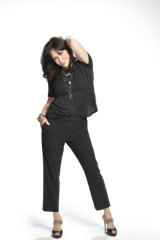 Shannen Doherty: “There’s a reason why we’re all together again for this.”Credit:CBS Studios

For the reboot, the now-older cast took equal credit as co-producers, and worked with the writers to create fictional versions of themselves, altering personal details largely to insulate their off-screen spouses and families from anything the show might explore.

Some real-life headlines carry into the show, and others do not. Garth said those choices were all individual. Doherty, for example, chose not to include her real-life battle with cancer.

“We were extremely involved in the whole process and the writing of everything and the selecting of what we thought would be good to tell for each character,” Garth says. “And there were times … we would say, if you can’t figure out a story, go to the truth of what you know about these people and let’s write to that.”

Spelling says there were some moments during filming which were deeply uncomfortable.

“I remember one line, I was supposed to say something sarcastic about being an actress, or being self-centred, and [the writers] were like, it’s funny, say it,” Spelling says. “You just have to trust that even though I am sensitive to it, it’s funny to other people, so I looked at it from a little bit of a bigger perspective.”

Perhaps the biggest challenge in reuniting the cast was not the question of who would be there, but who would not: their co-star Luke Perry, who played brooding James Dean-esque Dylan McKay, died in March.

In the first episode of BH90210 Perry’s death is acknowledged several times, but particularly, and poignantly, in a scene which blends into a clip of original footage from the pilot episode of Beverly Hills, 90210. (Have the tissues handy; it hits unexpectedly hard.)

The moment is impactful, reminding the audience, if nothing else, of just how young the cast were when they filmed the original 90210 pilot.

“That was something that took a lot of collaboration, a lot of thinking through,” Garth says. “We wanted to make sure it was the right place for it. And there were times when it was suggested that we do it in other ways and that just didn’t feel right, so none of us could go there.

“The last image that we show on the show, from the first episode, was just so representative of where we started and just the genesis of the love of this group of people,” Garth adds. “And that wouldn’t be complete without him; he was such a cornerstone of that love that we all have.” 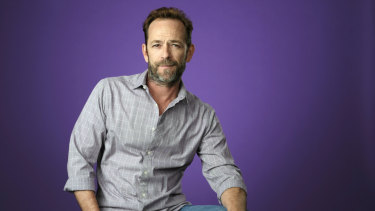 Shannen Doherty on Luke Perry (pictured): “It helped all of us in a big way, paying our respects to him.”Credit:AP

Perry’s death was also pivotal in securing the participation of Doherty who had, before his death, decided she would not participate in BH90210.

“Nothing to do with any of the actors, I just wasn’t in that place in my life and I didn’t want to do it,” Doherty says. [Between 2015 and 2017 the 48-year-old actress was dealing with breast cancer.]

“I’m very grateful that they came back and asked because I think being there together as a group after losing somebody that meant so much to us was important,” Doherty says. “And I think it helped all of us in a big way, paying our respects to him and having each other to lean on.

“I think there was just something that as you’re older, and you get to know people more and you work with them in a different capacity, there’s this deep appreciation for them as humans,” Doherty says. “There’s a reason why we’re all together again for this.”