The team making “Our Flag Means Death” were in a situation not unlike that of their protagonist, Stede Bonnet (Rhys Darby). At the beginning of the HBO Max series, Caribbean planter Stede has a mid-life crisis and pours his money into a ship called The Revenge, which is snazzy enough (and complete with a library begging to get trashed by a tropical storm), but by no means is it a match for the British Navy’s big ships of the line. Likewise, the workplace comedy and slow-burn romance Stede is at the center of has an incredibly ambitious setting, the ocean, which it needs to make work without necessarily the money to build an actual seafaring vessel “Master And Commander” style. IndieWire spoke to Visual Effects Supervisor David Van Dyke and cinematographers Mike Berlucci and Cynthia Pusheck about how they were able to blend technologies and techniques to get The Revenge out to sea.

Van Dyke said that a hybrid approach was much more appealing than building a ship against a blue screen set, which would’ve made every shot on the deck of The Revenge a visual effects shot. “When we went into this, at first there was a lot of conversation about it being more of a ‘Mandalorian’ level,” he said, referring to the “Star Wars” series that popularized the method of shooting against a huge, wrap-around wall of LED panels in lieu of the chroma key screens that make any superhero behind-the-scenes extras look a little goofy. These panels, adjusted in real time by computer engines, allow for more dynamic lighting choices, since LED lights have a greater versatility in the qualities they can reflect back onto an actor’s face or elements of a practical set. The camera is also freer to move in these volumes — the filmmaking term for a space where motion capture or compositing takes place — since the environment rendered by the computers can be adjusted in real time, tracked to the exact point of view the camera is taking.

“Because of the nature of our shots, it put us in a position where we didn’t have to have the bells and whistles that go into making ‘The Mandalorian’ work,” Van Dkye said. “We did have an engine-based LED. I would say technically it was wrapping around about half of the ship in a giant [J-shape]. And it was tracked and [we used the engine] to keep the horizon line.”

And not every show needs to have, or can afford, a “Mandalorian”-sized volume. Van Dyke pointed out that “Our Flag Means Death” wasn’t generally trying to navigate through hugely complex CG environments. “We’re talking about a lot of sky and a lot of ocean,” Van Dyke said of the majority of the show’s environments. “If you do that in the LED and especially if it’s tracked, it really, really works nicely because you don’t need to be like pixel perfect. Like, if we’re walking through the Grand Canyon, you don’t need to see things like rocks and things moving in perspective and working perfectly in camera.” 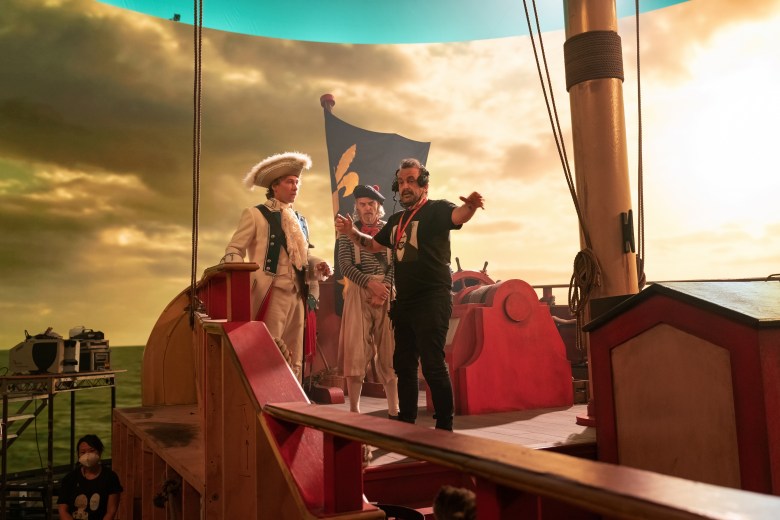 What the series did need, according to Van Dyke, is a moving, dynamic photograph that can be dropped in behind the principle set, what he called a “dynamic translate.” “We have moving ocean, and if we need to put anything else in the sky, we could do that. We can put our ships in there. And then what it would do is either give us an entire shot on camera or it would give us 80 percent of the shot. So instead of doing an all blue screen situation where we’re doing CG water, every single shot, and suddenly you’ve got 300, 400 CG shots that are literally just people talking on the deck of a ship, we have this dynamic translate, so everything’s working properly and in perspective with the camera and it gets us there.”

From the perspective of the show’s cinematographers, Mike Berlucci and Cynthia Pusheck, that freedom was hugely important in order to achieve the show’s tone, itself a hybrid — in this case an irreverent, slightly theatrical comedy mixed with a more dramatic rendering of the pain and longing that drives its characters out to sea. “It’s not just a comedy, it’s a romance,” Pusheck said. “And so it slid into a much more visual realm.”

Berlucci said that he and Pusheck had a lot of ideas about how the show should look, “Then when you get there on the day and you start seeing [the actors] play the scenes and it just completely transforms it. It sparks little ideas on the day. I remember times where we completely switched out [the backgrounds on the LED wall]. We basically had a library of background plates, different skies and different water and you’d sit there and watch the rehearsal and then you’re like, wait, no, this should actually be something different. Let’s soften the sky and let’s not do the big, top hard sunlight on it.” 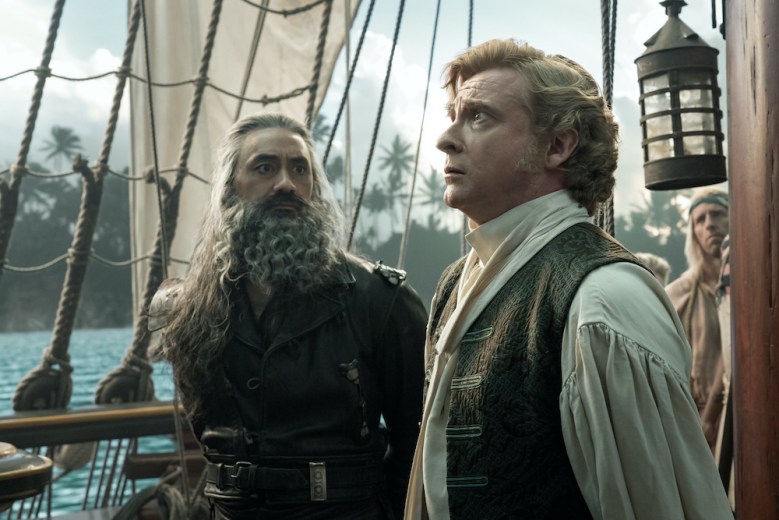 Taika Waititi and Rhys Darby in “Our Flag Means Death”

The ability to adjust the feel of the environment based on the emotion of scene allowed the show to feel even more theatrical when it needed to and also more emotional when it needed to, even verging on melodrama in some of its big, bloody sunsets. “Our Flag Means Death” required both enough of a sense of realism to be believed and enough of a sense of artifice to be funny, and the ability to adjust the environment allowed Berlucci and Pusheck to achieve both at once. But the freedom of the LED wall required meticulous planning and preparation.

“When you work with volume, you need lead time because you have time to build your assets, look at review, adjust, change it and sometimes — you’re seeing it the night before or the morning of,” Pusheck said. “Like for me, I got into a whole sequence where we had to have a cove and we had one plate and it was kind of front lit and it wasn’t great, but it was the only one we had and it had to, story-wise, track. So the flip side, where if maybe that had been a blue screen, [we would have] probably had more choices or could have evolved it. There’s pluses and minuses, you know, but overall for the whole season, it was huge advantage.”

“It was very immersive,” Berlucci said of the LED wall. “It was high. I know there were a few people who got sick on it. Sea sickness.” The 30 foot tall LED wall could wrap around a significant portion of the ship, with the rest covered by green screens and, according to Pusheck, “the long stretch of the J [shape] gave us a lot of shooting options, because we knew with a comedy we’d have two and sometimes three cameras [going]. If we’d had just a flat wall that had to move around, you could have always had one angle, but in trying to really find a way to shoot this show that gave us more options, the J worked. You could do wide [shots], you could do two and three cameras, and stick on your wall.” 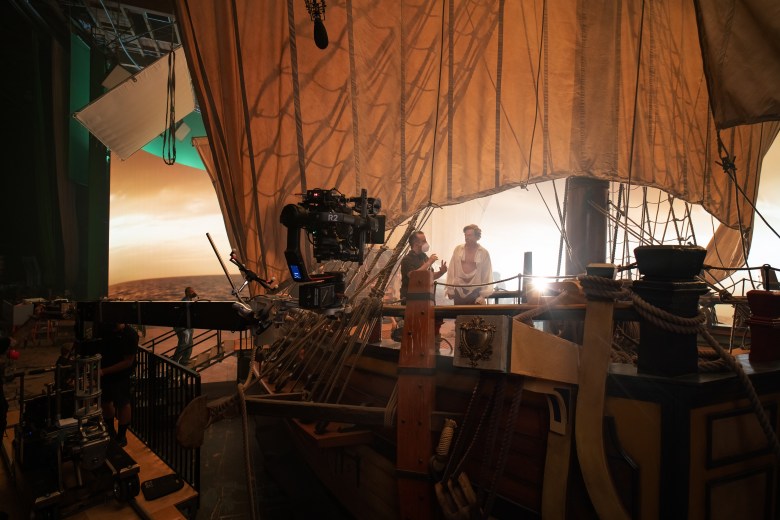 The set of The Revenge on “Our Flag Means Death”

For Van Dyke, the process of creating plates for the LED wall taught him and his team they could build even more varied and bespoke environments for the show, or any other workplace comedies that happen to be set during the Age of Sail. Van Dyke was able to find ways to stitch plates together and loop the ocean so that “Our Flag Means Death” could have shots of water go on as long as they needed to — no one is really watching the series and tracking which current or white cap is which — but in a potential second season, he’d give the sky the same treatment.

“What I would do for Season 2 is essentially take a lot of the sky plates and I’d build stitch sky moments — this is just clouds in the sky that needs to be dusk. It needs to be afternoon. It needs to be clear sky, it needs to be dawn, it needs to be stormy, sky needs to be night— all these pieces, right? And then you take that, you build those stitches and then we take our CG water and we light our CG water accordingly to the plates,” Van Dyke said. “And then all of a sudden what I’d love to have is this beautiful library of like 30 to 40 backgrounds that we can say, ‘Hey, Mike Berlucci, here you go. Which one would you like? Take your pick, go bananas.’ ‘Hey, LED team? Just press play.’”