“The Voice” semifinals are here, but Nick Jonas almost didn’t make it.

A muted Jonas revealed at the top of Monday’s episode that he took a “spill on a bike” over the weekend, resulting in a “cracked rib” and “other bumps and bruises.”

“How are you feeling buddy?” asked host Carson Daly.

“I’m feeling OK,” Jonas responded. “I’ve been better but I’m doing alright… I wanted to go ahead and say (this) just in case I’m not as physically enthusiastic as I usually am.”

Although Jonas didn’t provide any more details about his accident, he did attempt to make light of it: “Blake (Shelton), please don’t make me laugh too much because it hurts to laugh.”

In typical Shelton fashion, he accused Jonas of “trying to get sympathy votes.”

Last week on ‘The Voice’:Kelly Clarkson has a leg up after half the contestants are eliminated

Now, back to the regularly scheduled program. The Top 9 contestants laid it all on the line for a coveted spot in the finals next week. Each singer got two opportunities with a solo and trio performance from the 1970s. And the stakes are higher than ever: Only half of the artists will survive.

“This is a crucial moment for everyone on the show this week,” Shelton said. “It’s so weird to hear Carson say (it’s) the semifinals already. I feel like we’re just starting.”

There were tears, stunning production backdrops, moving stories and, of course, stellar vocals. This is “The Voice,” after all. Here’s what happened: 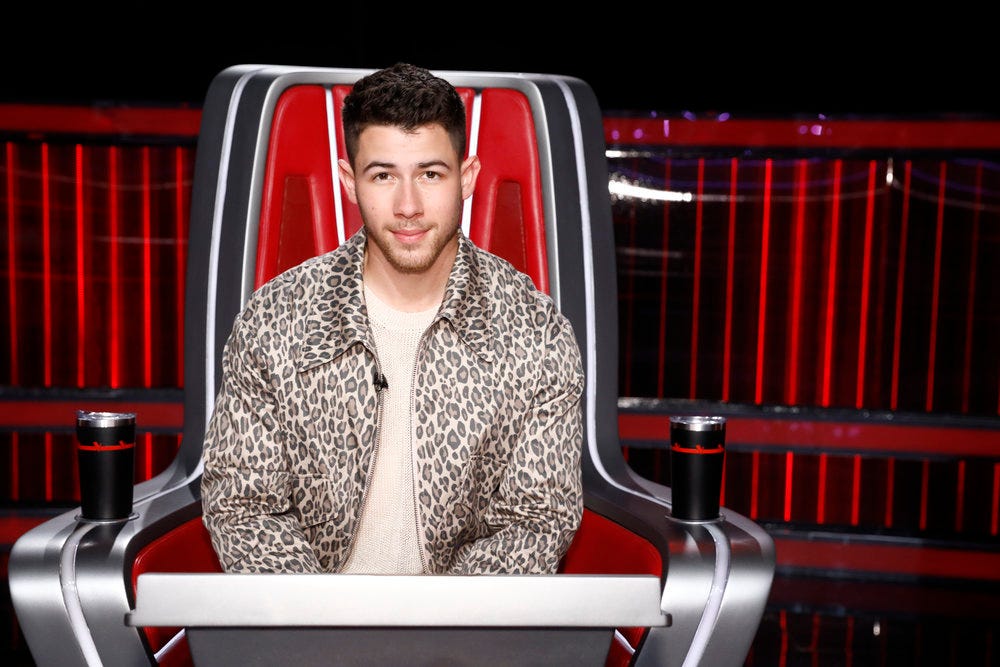 Nick Jonas revealed on "The Voice" Monday that he suffered a "cracked rib" during a recent bike accident. (Photo: NBC, Trae Patton/NBC)

John Legend won his first season as a coach in 2019. But he’s gone cold ever since. Can the EGOT winner add another “Voice” trophy to his crowded mantel this season?

The 22-year-old Illinois native took everyone to church with a soulful rendition of Tamela Mann’s version of the gospel song “I Can Only Imagine.” He earned a standing ovation from all coaches, including Jonas, “which means something” with his injury, Daly said.

The song not only meant a lot to Legend and Jonas, who were both raised in the church as children, but it meant the world to Solomon’s mother. “Every round she’s asking me if it’s a gospel song,” Solomon explained before performing.

Clarkson called Solomon’s performance “so inspiring.” She added, “If you ever start a church please send me the location.”

The 37-year-old Chicago native dedicated her rendition of Bob Marley and the Wailers’ “Turn Your Lights Down Low” to her mother, who died the day of the show’s Battle Round.

The last original coach on the NBC singing competition entered Season 20 with seven wins under his cowboy belt, the most of any coach in “Voice” history. And he’s going for his seventh title this year.

The 34-year-old Texan went back to his country roots on John Conlee’s “Rose Colored Glasses.” The country crooner said Young’s rendition “reminds me of myself.”

“Incredible job. I couldn’t be happier for you man,” Shelton added. Clarkson compared Young’s fusion of “rock-and-roll and country,” plus his soul and rasp, to Travis Tritt.

The 19-year-old Pennsylvanian performed a stripped-down version of Boyz II Men’s “It’s So Hard to Say Goodbye to Yesterday.” The judges collectively agreed that Anthony is the real deal, earning another standing ovation.

“To stand up here on the stage without any instrument, anything backing you, anything to hide behind. just you and your voice… that takes a lot of nerve,” Shelton said.

Legend added that Anthony keeps “doing these iconic songs and knocking them out the park.”

The “American Idol” alum has won three times as a coach and is looking for her fourth title. She’s in the best position to win because she has three singers remaining, the most of any coach.

The 34-year-old South Carolina native, who won the wildcard spot with the Instant Save last week, channeled his heartbreak from a bad breakup into a moving rendition of Duncan Laurence’s “Arcade.”

Clarkson screamed in excitement over his performance. And in a rare moment in “Voice” history, frenemy Shelton agreed with her: “I understand why she’s screaming her head off over there.”

Shelton went a step further, declaring, “You got a good shot at winning this.”

The 17-year-old Californian, who Clarkson dubbed “a musical baby of Beyoncé and Pink,” took on Christina Aguilera’s “Reflection.”

It proved to be a herculean task. “Any person covering Christina Aguilera, good luck,” Clarkson said, but Zoë “delivered” a finale-caliber performance.

“Very few artists on this show can do what you can do,” Legend said. Clarkson added, “You did such a great job. I cannot believe your edge, I cannot believe how technically perfect you are.”

Clarkson called Wheeler “one of my favorite country singers ever and he doesn’t have an album, that’s saying a lot.”

The Jonas Brothers member returned to “The Voice” this season, replacing Gwen Stefani. But this isn’t his first rodeo: He was a coach on Season 18. Jonas has never won, though. Can this be his year?

The 16-year-old Michigan native, who is the youngest singer in the competition, gave an emotional rendition of Christina Perri’s “Human.” The high school student said she can relateto Perri’s song after battling depression and bullying.

Legend called her rendition “revelatory.” Clarkson dubbed her “powerful.” Jonas applauded his singer with a standing ovation: “I’m so proud of you for digging deep… It’s so brave and you absolutely nailed the vocal performance.”

Cam Anthony, Corey Ward, and Kenzie Wheeler paired up for Elvin Bishop’s “Fooled Around and Fell in Love.” Dana Monique, Pia Renee, and Victor Solomon brought the soul (and a faux afro) to Earth, Wind & Fire’s “Shining Star.” Gihanna Zoë, Rachel Mac, and Jordan Matthew Young teamed up for a rocking rendition of Fleetwood Mac’s “Go Your Own Way.”

The singers’ fates are now up to America. The finalists will be revealed during Tuesday’s live show (8 EDT/PDT) following overnight viewer voting.

The field of 9 will be narrowed to 5, with only one singer from each team advancing, plus an instant-save wild card contestant.

“The Voice” continues Tuesday at 8 EST/PST on NBC.