One classic rivalry on-screen is that of Victor Newman (Eric Braeden) and Jack Abbott (Peter Bergman) on The Young and the Restless. Since 1989, the two have gone at each other in every way imaginable on the daytime soap. This begs the question, are the two friends when the cameras stop rolling, or does life imitate art? 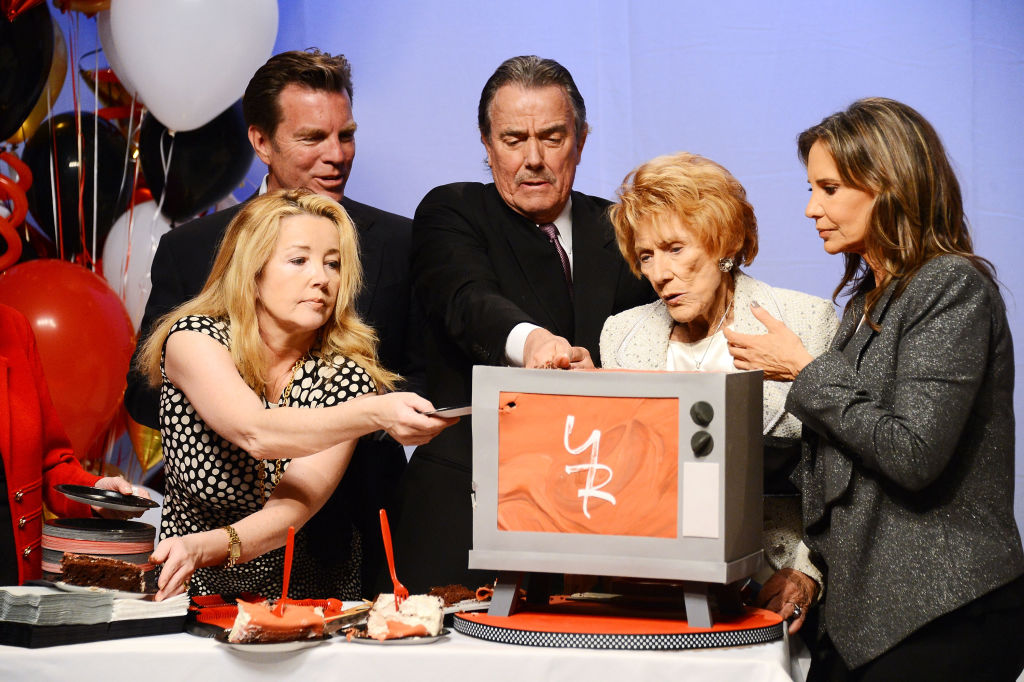 The Young and the Restless’s most powerful man in Genoa City, Victor Newman, has never had a friendly relationship with his longtime rival, Jack Abbott.

Braeden joined the cast in 1980 in the role he originated with Bergman the following suit nine years later in 1989 when Terry Lester resigned from the role. The two sworn enemies have only managed a handful of “truces” when it comes to business.

Their ongoing feud has had its share of ridiculous, sometimes “out there” storylines through the years. Most of which had more to do with trading relationship partners such as Victor’s wife, Nikki (Melody Thomas Scott), Jack’s on-again-off-again love interest, Phyllis (Michelle Stafford), and Jack’s sister, Ashley (Eileen Davidson).

We’d be remiss not to mention Sharon’s (Sharon Case) ties to both, Phyllis’s relationship with Victor’s son, Nick (Joshua Morrow), and on and on we go. Victor’s company, Newman Enterprises, and Jack’s family company, Jabot Cosmetics, have also faced off many times over the years.

The struggle for control over each company, respectfully, has rattled the Newmans and Abbotts for 40 years. With things constantly so tense between the script pages, is it possible for Braeden and Bergman to be friendly off the set?

Braeden and Bergman once had an altercation

Sometimes things on set spill over into real life. Such is the case with Braeden and Bergman’s 1991 altercation that came after things had pent up for too long.

The first couple of years filming together proved difficult as two strong actors with domineering personalities clashed. Each had a different approach to work and it didn’t sit well when maneuvering scenes together. Unfortunately, the tension ended with an explosion.

“Because it was such a big thing at the time, and something that obviously I wish one could have avoided, and also to show how it is possible to get beyond something like that and develop enormous respect,” Braeden previously told Soap Opera Digest.

“There was a time when I said to Peter, ‘Look, we may not like each other, but we are both good for the show. This storyline that you and I have, this enmity between us, is good for the show. It makes for drama and conflict.,’” he said.

Braeden said Bergman agreed and the two squashed the beef behind the scenes.

Are Braeden and Bergman friends in real life?

These days it looks like the two Y&R stars maintain a working relationship just fine, regardless of how their characters treat each other.

“It is part of our history here,” Bergman previously said via Michael Fairman TV. “Eric and I worked together for 20 years, and we have this enmity that the audience clearly loves.  It’s a crazy rivalry and it still has legs, and I am very grateful for It. We work together just fine.”

For 29 years and counting (since the two called a real-life truce), Braeden and Bergman often appear at events together and can be found supporting and congratulating each other via multiple interviews.

“I’m deeply grateful to have worked with such great colleagues over the years and having had such great support from my family, from my wife,” Braeden told People in celebration of 40 years on the show. “You know, I consider myself very fortunate.”

Bergman echoed those sentiments noting that the 2019 death of fellow castmate, Kristoff St. John, brought everyone even closer.

“When we did (Neil’s) memorial service, we had already been through a funeral. We had already done scenes where Neil died, but we had not as a company really come together to mourn this loss,” he previously told USA Today. “It brought us all together in a really powerful way.”

Regardless of Victor and Jack’s never-ending rivalry, it’s good to know the two have a better relationship outside of the Y&R set.

The Young and the Restless airs weekdays on CBS.