What was most striking was the silence.

Much of the coverage on CNN and MSNBC starting at 10:00pm ET Wednesday when it became clear Russia was launching a full-scale invasion of Ukraine was of city squares and skylines from the besieged nation, where little appeared to be happening. The most a viewer watching in real time might witness was the slow creep of daylight into the sky above the Independence Monument in Kyiv’s Maidan Square. The gunfire and shelling CNN’s Matthew Chance and MSNBC’s Erin McLaughlin said they heard — prompting them both to dramatically don flak jackets and helmets, the war correspondent version of weatherpeople leaning into high winds while covering a hurricane — was barely glimpsed. And yet the global order was changing.

“Shock and awe” this was not. It was something much more sinister, and U.S. cable news was ill-equipped to cover it.

CNN has long engaged in spectacle-chasing, whether of sledgehammers tearing into the Berlin Wall in 1989, the burning oil fields of the Gulf War in 1991, and the orange fireballs erupting from central Baghdad in 2003. But no such spectacle presented itself. Vladimir Putin is far too subtle and calculating to present an image that’d reveal the “strategic military operation” he’d unleashed was actually a full-scale invasion. The visual spectacle he unleashed instead was barely covered by cable news: an unhinged, obviously prerecorded speech that announced his plans for the “demilitarization and denazification” of Ukraine. Code for regime change.

That speech was all over Twitter and translated quickly enough, while the cablers seemed incapable of recognizing this as a declaration of war. (And failing until some time later to point out the hatefulness of Putin’s claim that Nazis run Ukraine, especially considering President Zelensky is half-Jewish.) The most useful information also came from Twitter via Ukrainian government officials announcing where explosions had been heard around the country — as well as a bizarre confirmation that Russia seemed especially interested in securing the remains of the Chernobyl nuclear power plant. The few images of actual cruise-missile blasts Thursday also came crowdsourced on social media from civilians on the ground. But so did strange, thinly sourced rumors that French diplomats had recently reported a marked change in Putin’s demeanor that hinted he’s no longer a rational actor — even former U.S. Ambassador to Russia Michael McFaul repeated this on MSNBC. 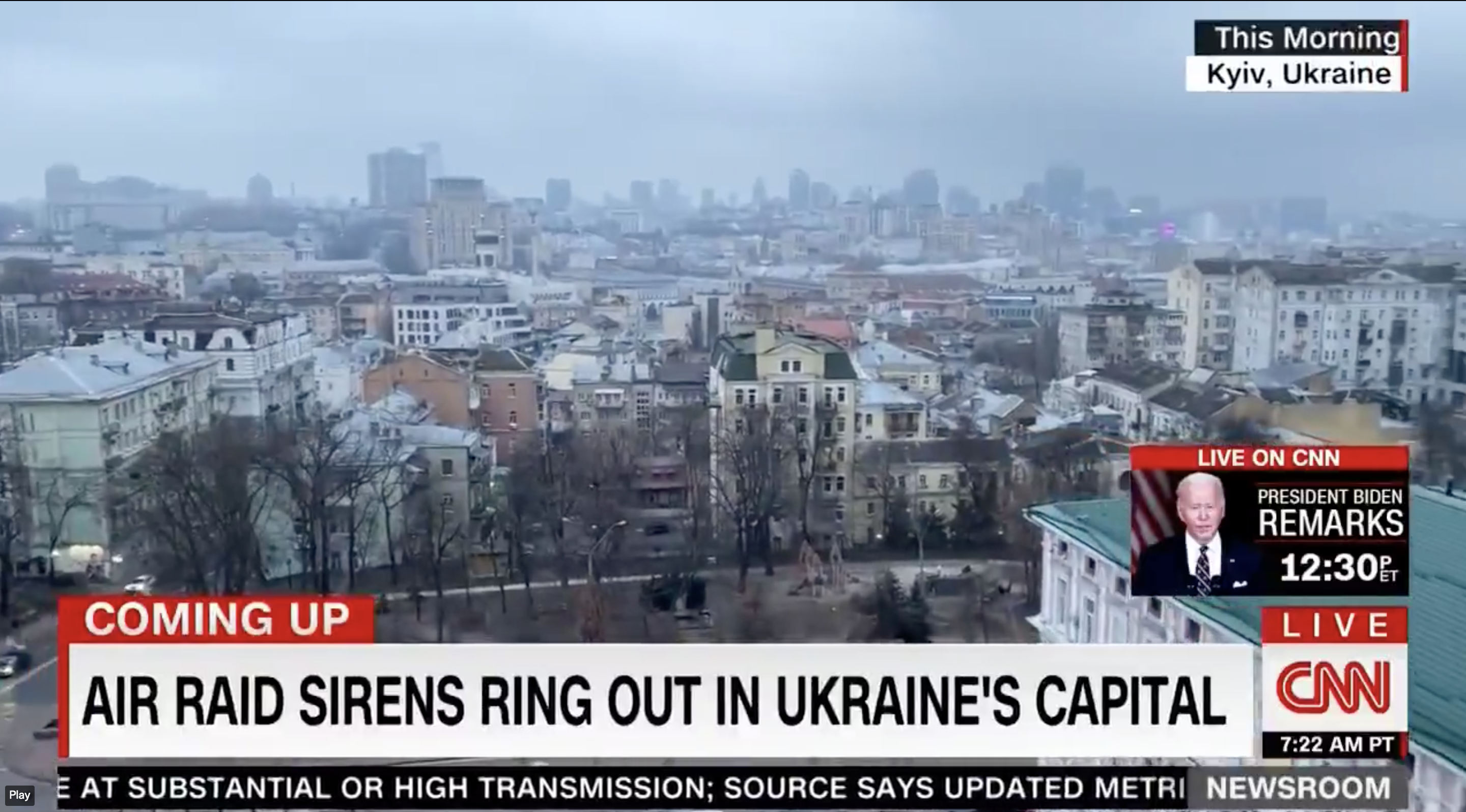 The image viewers last saw before an Applebee’s commercial ran.

The tone on both cable news and social media was one of trying to make sense of it all and coming up short. The one point of consensus is that this is Vladimir Putin’s war and of his choosing alone — even Putin’s admirers essentially acknowledge that, if only because it plays into their fetishization of him as a bold, decisive strongman. To their credit, CNN did air a report showing the large anti-war protests that have gathered in St. Petersburg, to give a sense that not all of Russia stands behind Putin’s actions. 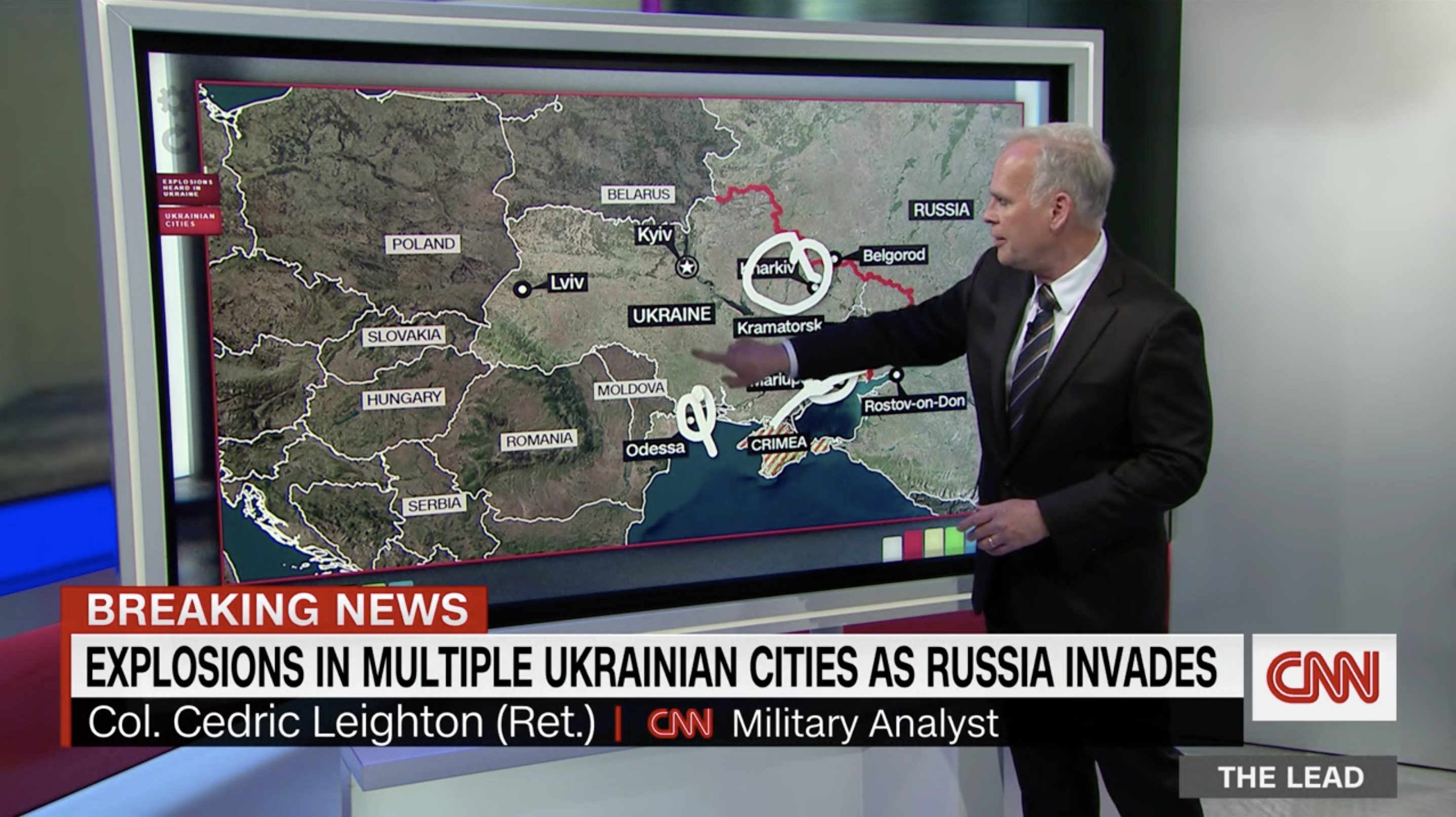 It’s easy to make fun of how celebrities respond to moments of crisis like this, such as AnnaLynne McCord reciting a poem about how she wished she had been Vladimir Putin’s mother. But the monetization needs of legacy media lead to tonal incongruities of their own: a haunting shot of a grey-skied Kyiv in which an air raid siren was blaring cut immediately to an Applebee’s commercial on CNN — a moment that trended all day on Twitter. How can you go about “eatin’ good in the neighborhood” when CNN’s Clarissa Ward has just been interviewing terrified Ukrainians hunkered in an underground metro station?

The cablers’ horse-race component of this is already in full-swing, with Rachel Maddow, on a hiatus from MSNBC to pursue other projects, announcing her return to primetime coverage of the war Thursday evening some hours in advance. For its part, CNN certainly hasn’t forgotten that the January 6 insurrection drew the highest ratings in its history.

Of course, if you can’t monetize the news, then we might not have news reporting at all. The events of the past day, though, have shown that we have more tools for gaining knowledge than ever before, and they’re mostly serving to show us how little we do know.