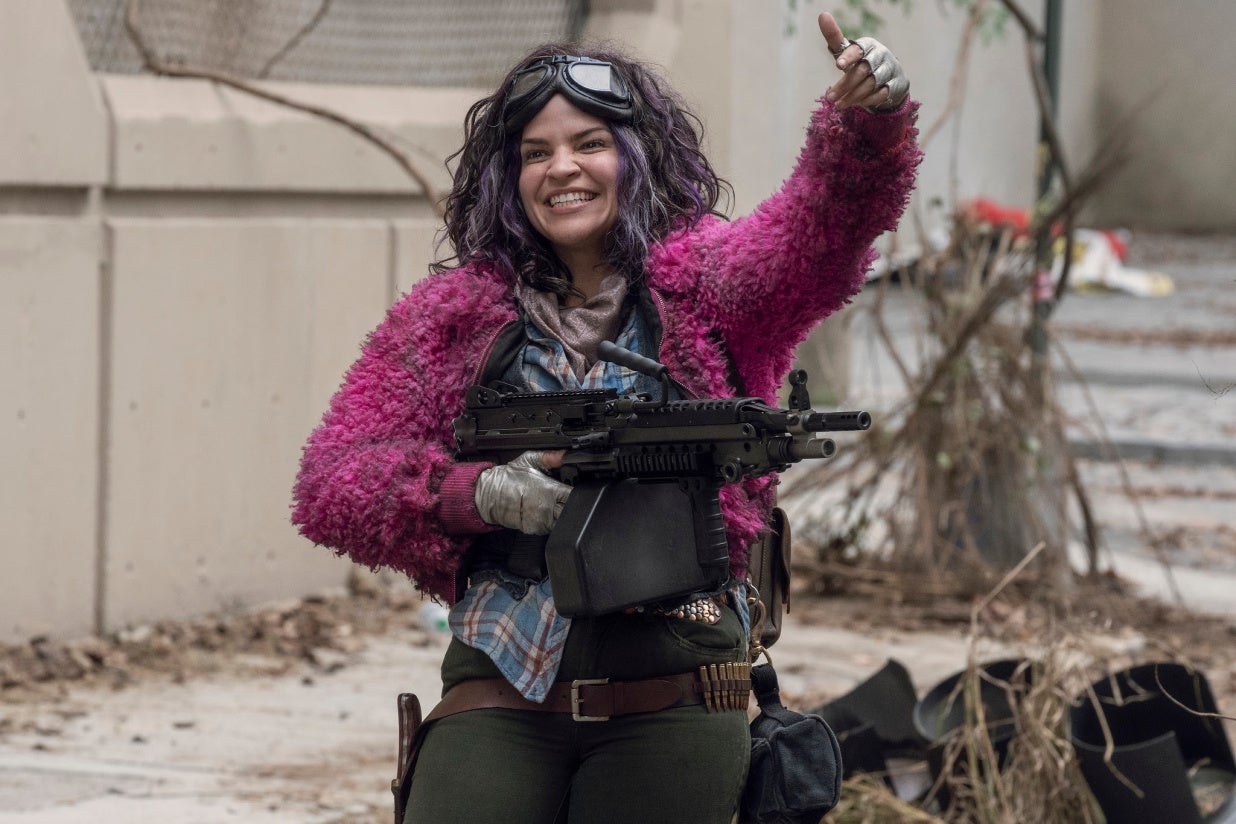 At the very end of last week’s episode of “The Walking Dead,” we met a new character — new to the TV show anyway. This week’s episode quickly confirmed that this woman is who fans of the comics thought she was: Juanita Sanchez, aka Princess (Paola Lazaro).

This week we got to know Princess pretty well, as she spent the episode with Yumiko (Eleanor Matsuura), Eugene (Josh McDermitt) and Ezekiel (Khary Payton). She tells them she’s been alone there in the city — the show doesn’t say what city it is but in the comics it’s Pittsburgh — for over a year, and that the trio is the first living people she’s seen in that time.

Princess is pretty eccentric and awkward, having basically lived out a “last woman on Earth” scenario, and so her people skills are pretty rusty. But she’s a nice person, and wants to help the group out — secretly hoping they’ll be grateful enough to be her friends.

In a roundabout sort of way, she succeeds, and in the end Yumiko decides that Princess should come with them to their meeting with the mysterious Stephanie and her mysterious group.

This is more or less how Princess’s introduction happened in the comics. And in that version of the story she was being completely honest — she really was just a random person who had been hanging out by herself in Pittsburgh for a long time.

But “The Walking Dead” showrunner Angela Kang has shown a propensity for taking things from the comics and changing them just enough so they turn into something fresh.

We just saw this with Negan (Jeffrey Dean Morgan), whose arc with the Whisperers went pretty similarly to the comics version, but was altered in a way that added several excellent character beats that weren’t present on the page. In the “Walking Dead” comics, that whole thing was improvised opportunism on Negan’s part, but in the show it was Negan making explicit decisions to try to make up for his past crimes. It was a minor change in terms of plot, but a major one for his character.

And the TV version of “The Walking Dead” has not been shy about dramatically shaking things up lately. The broad beats of the Whisperer War have been the same as the comics, but so many of the details have been pretty different.

For Princess, there’s an obvious change from the comics that “The Walking Dead” could make, and that’s to have her be a sort of sentry for the Commonwealth — the group that Stephanie belongs to in the books — or the helicopter people from season 9.

Last week, when our heroes rolled into town, they noted how incredibly unlikely it is that a city that big would be almost entirely clear of zombies. That suspicion is not resurfaced this week, as I suppose we’re supposed to think that Princess and/or the group she was with before were responsible.

But the outlook for the series is generally very different than it was in the comics, because of those helicopter folks who swept Rick away last season. Those folks also popped up in “Fear the Walking Dead” and will factor heavily into “The Walking Dead: World Beyond.” We don’t yet know if those folks are the TV version of the Commonwealth, renamed so as to reflect other changes in the adaptation, or if they’re a totally separate entity.

But either way, those are both clearly organizations who could have handled clearing the streets of Pittsburgh like that. And in the comics, Princess actually kinda prefers doing her own thing because of past trauma, and so hanging out there by herself could be an assignment. And maybe at this moment her assignment was to vet the crew from Hilltop.

This is, of course, just wild speculation. And normally at this point I would say something about how we’ll probably find out for sure next week, but we already know that we won’t — the season 10 finale of “The Walking Dead,” which was planned to air next week, has been delayed indefinitely due to the coronavirus pandemic.

So instead I’ll just say that we’ll probably find out in the next episode, whenever it ends up airing. Hopefully it won’t be too long.