Like a herd of cattle stampeding through a Tulsa ranch, the “Watchmen” premiere comes at you fast. Easily Damon Lindelof’s most tightly packed episode since “The Leftovers” Season 3 debut, “The Book of Kevin,” “It’s Summer, and We’re Running Out of Ice” builds a vivid new world on the foundation laid by Alan Moore and Dave Gibbons’ graphic novel — and then it digs a new basement to boot. By opening with the 1921 Tulsa Race Massacre, Lindelof establishes a new (and true) starting point for his story, as well as a stark framing that sets the stage for the series’ central conflict: the white supremacists in the Seventh Kavalry and a police force led by a black detective, Angela Abar (Regina King).

In between, there are easter eggs galore for fans of the original comic book, more than a few key moments of foreshadowing, and even an extremely strange break in the action to watch an unnamed character played by Jeremy Irons cut a cake with a horseshoe. All of this, and especially scenes like the latter, beg the audience to ask, “What the fuck is going on?” — and that’s before getting to the final twist, where one of the central characters, played by one of the cast’s more famous faces, is killed off.

But much like the series of “Watchmen” comics that inspired this so-called remix, HBO’s new don’t-call-them-superheroes drama starts with just part of the story. There will be individual issues with clearer standalone arcs and points to go with them, but there will also be conclusions drawn from their eventual culmination. Everything in Episode 1 may not make complete sense for a while, but the uneasy atmosphere raised by such overt juxtapositions — black cops beating up white suspects, an enfeebled black man (supposedly) lynching a white police captain, even intense racial unrest within a liberal utopia — is meant to make your brain hurt as much as the overall information overload.

Everything in this alternate American history is familiar, and everything is alien. Somehow, both are true, which seems even more plausible when squids are dropping out of the sky. “Watchmen” is here to shake you up; to stimulate new discussions about age-old issues; to challenge preconceived notions by framing them from new perspectives. Admittedly, as a white critic, I can only imagine it’s easier for me to process a lot of these images and themes from a safe distance. That final tracking shot, moving up past the note Will Reeves (Louis Gossett Jr.) has held onto since 1921, and over Judd Crawford’s (Don Johnson) hanging body, ends on an homage to the comic book’s indelible image — the drop of blood on The Comedian’s yellow smiley face now falls on Judd’s sparking badge.

But the shot preceding it is an indelible image all its own, loaded with history both ancient and fresh. And like the smiley face before it, that badge doesn’t mean the same thing it did before the blood hit. “It’s Summer, and We’re Running Out of Ice” invites the dissection of a tragic event oft-overlooked by the history books. It establishes a black, female hero unlike we’ve ever seen on this scale. But not everything it introduces is easy to process, and perhaps it’s best to take a bit of advice from Lindelof’s last series: Let the mystery be — for now. 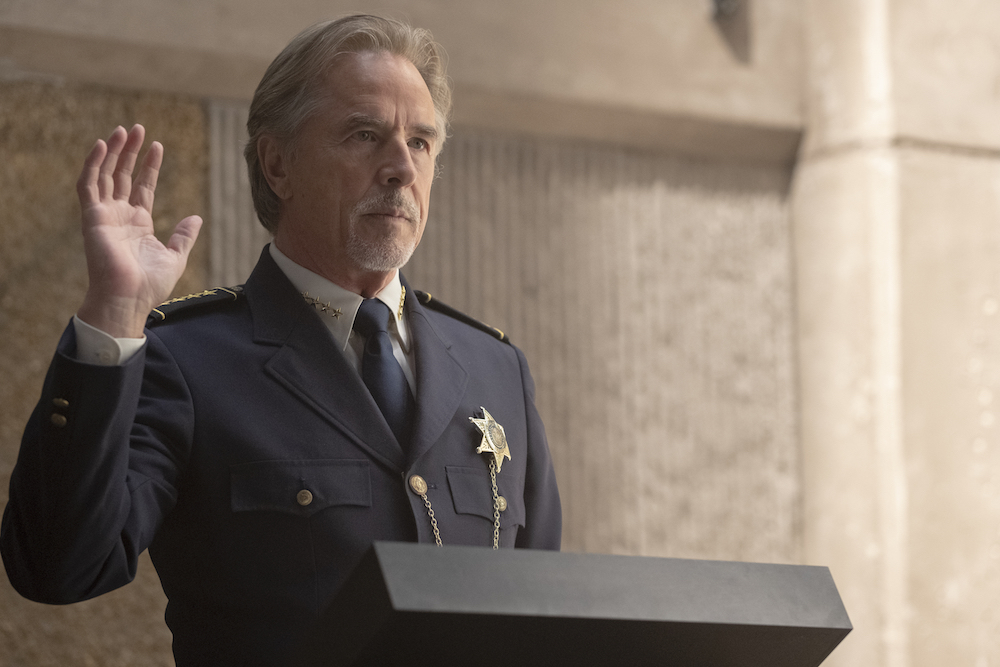 Masks Off: What We Know

Robert Redford is the President of the United States. He has been for more than three decades. The “Sundancer in Chief,” as one radio caller labels him, passed a reparations bill where descendants of slaves don’t have to pay taxes. These three pieces of information are critically important to understanding many of the personal dynamics at play in the premiere. It’s why Topher (Dylan Schombing) attacks his classmate for bringing up “Redfordations” during Angela’s presentation. It’s why the Nixonville suspect probably shouldn’t have answered “yes” when Looking Glass (Tim Blake Nelson) asked him if all Americans should pay taxes. It’s why there’s a different, yet all-too-familiar, kind of tension at play when a black cop pulls over a white hick hauling a truckload of lettuce.

The world of “Watchmen” is as important to absorb as it is fascinating to deconstruct. Having seen the premiere half-a-dozen times now, there are still new details emerging and more to come as the subsequent episodes roll out. Yes, there’s even more to admire if you’re familiar with the comic, but a deep understanding of the text doesn’t change the quality of the current story. It’s just a fun additional layer, for those who want to cover it.

Setting aside the deluge of information, what’s also clear from the pilot is what many have suspected for a while now: Nicole Kassell is a directorial force. For as hard as it would be to write the “Watchmen” pilot, it’s equally difficult to map out its visual language without redundantly replicating Zack Snyder’s 2009 movie, or the comic books he so dutifully brought to life. Kassell wasn’t recreating the text; she’s creating a new world, filled with critical onscreen cues, giant set pieces, and an impeccable sense of style. Just look at that opening shot, starting with an iris in before pulling back to a diegetic widescreen of the screen itself, where little Will is watching his favorite movie.

Individual shots stand out as much as sequences, which is intentional. Kassell hand-crafted many of her frames to remind viewers of the way Dave Gibbons’ artistic designs fit within panels. That planning led to beautiful compositions like Will holding a baby in the American flag as Tulsa burns in the distance, or the yellow-masked police officers seated on either side of a screen showing the Rorschach-masked Seventh Kalvary standing and chanting. Kassell also uses these still or slowly moving shots to break up the speed of a montage (like Sister Night putting on her uniform) or an action scene (like the epic shootout at the cattle ranch). It all moves so gracefully, from start to finish, that she should have her choice of gigs once “Watchmen” wraps. 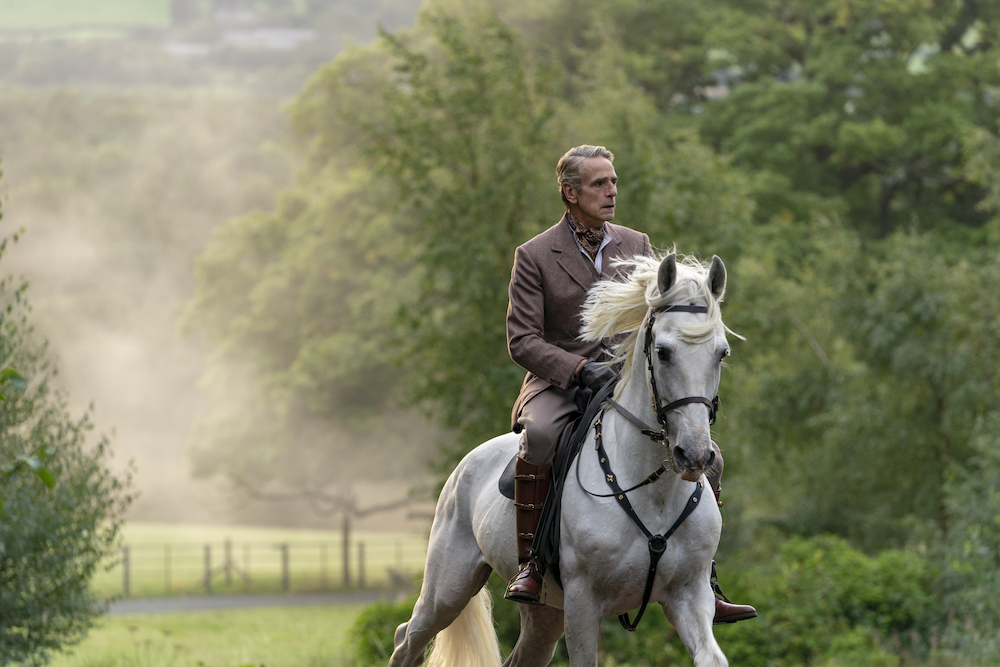 Masks On: What We Want to Know

What the hell is going on with Adrian Veidt?

Listen, I’m not going to pretend Jeremy Irons’ unnamed character is anyone other than Adrian Veidt, mainly because those behind the show are barely pretending themselves. But I have no clue what he’s doing. What’s this play he’s writing, and why does it sound like it’s related to Dr. Manhattan? (The former Jon Osterman is the son of a watchmaker.) Why does his butler, Mr. Phillips (played by Tom Mison), not know the difference between a horseshoe and a knife? And why can’t he bake a proper cake for Veidt’s anniversary dinner? And, wait a minute — an anniversary of what? These obviously unanswerable questions indicate (for those unfamiliar with Lindelof’s house style) not everything in the “Watchmen” pilot is meant to be understood. Sometimes it’s fun to be kept in the dark, and the way Irons relishes his mysterious role, well, this is one of those times.

Did Will Reeves really lift 200 pounds?

That’s the question Will asked Angela when he was sitting outside her never-to-be-opened bake shop, and he’d have to do just that if the wheelchair-ridden orphan somehow hung Judd from that tree. Odds seem more likely the Seventh Kavalry struck back after the police came for their soldiers, but again, squids are falling from the sky. There’s no telling what’s possible just yet.

Why is the Seventh Kavalry collecting watch batteries?

Outside Angela’s house, as a watch hand can be heard ticking by, the unmasked Sister Night and her captain discuss what they recovered from the raid and ensuing plane crash: watch batteries. Angela says they pulled a duffel bag from the wreckage, and it was full of old watch batteries made out of synthetic lithium — the kind that “were making people sick.” Judd speculates the Seventh Kavalry is making “some kind of cancer bomb,” but can it be that simple? And if they are, where do they want to deploy it? Given how the episode opens — with a massacre of black Americans by the KKK — the implication seems to be that the new group of masked white nationalists are planning an attack of equal or greater proportions. It’ll be up to Angela now to figure out when, where, and who. But given Judd’s death, there’s good reason to be “worried as fuck” — tick tock.