SINGER and songwriter Summer Walker is often recognized not only for her powerful voice but also for her signature tattoos.

Her most recent tattoo imprinted on the side of her face is the name of her new boyfriend. 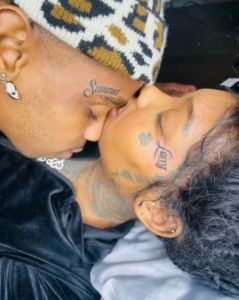 What is the backstory of Summer Walker's newest tattoo?

Summer Walker, 25, was seen showing off her newest tattoo in recognition of her new boyfriend LVRD Pharoah, whose real name is Larry.

The tattoo is part of a matching set as LVRD Pharaoh posed alongside her in an Instagram photo on November 22 showing Summer's name clearly tattooed on his face.

Fans responded with incredulity, with many saying she shouldn't have done it, and saying she hadn't healed from her last relationship with London on Da Track.

"I love you but this ain’t it sis. You haven’t even healed from the last relationship," one person posted in response to the photo.

Another person said, "Girl, you done lost your mind literally."

How many tattoos does she have?

Walker has over 24 tattoos on her face and body, ranging from new boyfriend LVRD Pharaoh's real name Larry next to her eye after the recent breakup with ex-boyfriend London on Da Track.

The two dated on and off since 2019 before breaking up for good in mid-2021. Walker and London on Da Track share a daughter, Princess Bubblegum.

How was Summer Walker discovered?

A studio manager at a record label, Renaissance Love, discovered Walker purely on accident during a Google search.

The manager shares the same name as singer Summer Walker and was googling herself when videos of Walker singing popped up.

Walker signed with the label and in August 2019 she released her first single, Playing Games, from her album Over It.