Fans of Friends are eagerly awaiting the reunion of Jennifer Aniston, Courtney Cox, Lisa Kudrow, Matt LeBlanc, Matthew Perry, and David Schwimmer in the eagerly anticipated HBO Max special. While many of the former sitcom stars have gone on to films and other TV projects, some have chosen to focus on work either behind the camera or outside of showbiz.

Though the actresses of Friends seem to be in the limelight more than the actors, LeBlanc, Perry, and Schwimmer are still pursuing their own career interests. So which actor has the biggest bank account? 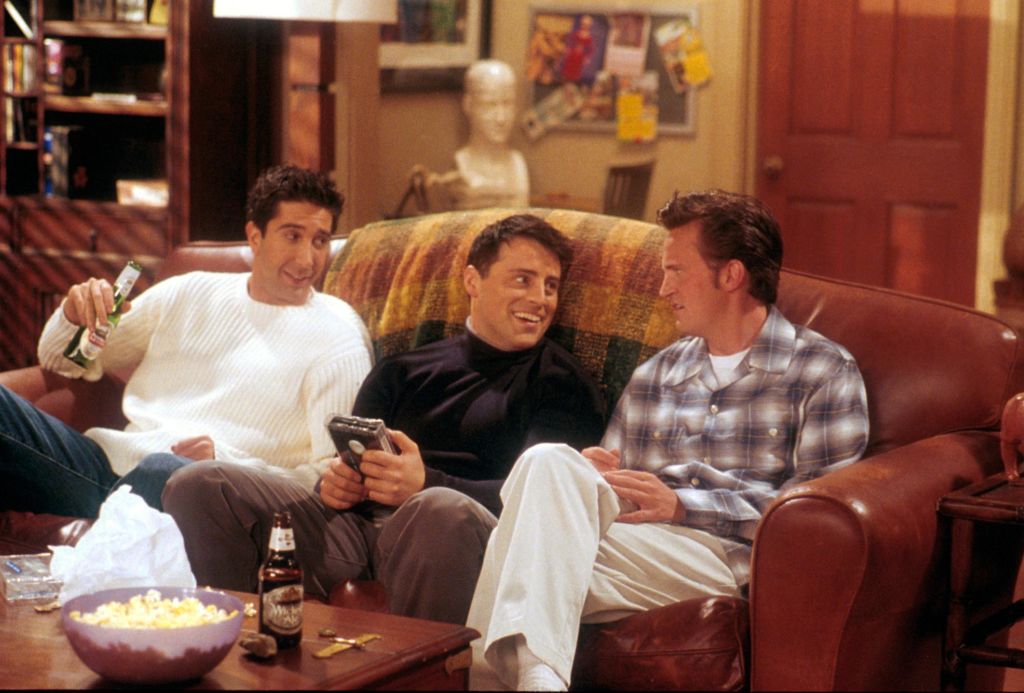 After playing Joey Tribbiani on the iconic NBC sitcom for ten seasons, LeBlanc tried to parlay the role in the Friends spinoff Joey. Lasting only two seasons, the show was soon canceled and LeBlanc ended his run as the beloved Friends character.

Finding more success on Showtime’s Episodes from 2011 to 2017, LeBlanc earned a Golden Globe Award and several Emmy nominations for portraying a fictionalized version of himself. When the series ended, the actor wanted to do a more family-oriented show and starred on CBS’ Man With A Plan.

“I read a bunch of scripts that were out there that were (about) recently divorced dads, back on the dating scene,” he told USA Today in 2017. “I thought, ‘That’s a situation where the kids would be pawns in a dating environment. What about a guy who’s married and has kids?’” The show was recently canceled after four seasons.

Though he starred in several shows following Friends including Mr. Sunshine, Go On, and The Odd Couple, Perry’s other sitcom’s never seemed to catch on and were canceled early in their run. While he tried breaking out of his Friends persona, Perry is best remembered as the lovable Chandler Bing.

Beginning on Friends when he was just 24 years old, Perry ended up battling a drug and alcohol addiction. Calling several years on the show “a blur,” Perry was in and out of rehab several times. “I ​don’t remember three years of it,” Perry admitted of Friends in a BBC interview. “I was a little out of it at the time — somewhere between seasons three and six.”

Perry has openly shared his struggles and has since become an advocate for those dealing with addition. “I was in the white-hot flame of fame. The six of us were just everywhere all the time,” Perry said, according to MSN.com. “From an outsider’s perspective, it would seem like I had it all. It was actually a very lonely time for me because I was suffering from alcoholism… it’s a progressive disease.”

Perry’s net worth is listed at $120 million.

Post-Friends, Schwimmer sought to shed his “Ross Geller” identity and headed to Broadway, where he starred in The Caine Mutiny Court-Martial, according to Biography.com. Also testing his skills behind the camera, the former Friends star directed two films: the 2007 comedy Run Fatboy Run with Simon Pegg, and the 2010 drama Trust, starring Clive Owen and Catherine Keener.

Most recently, Schwimmer is appearing in the Sky One comedy Intelligence, where he portrays an American intelligence agent teaming up with a British computer analyst to form a cyber crimes unit. Apparently, Schwimmer is enjoying work in the spy genre and admitted he wouldn’t mind playing an icon in the field.

“If I were offered to play James Bond – which will never happen in a million years – of course I would jump at the chance.” he told GQ in February. “It would be a really ridiculous comedy.”

Schwimmer’s net worth is reported at $100 million.