Parks and Recreation star Nick Offerman is a little behind the times when it comes to social media. Much like his fictional counterpart Ron Swanson, Offerman didn’t utilize platforms like Facebook or Twitter for years. Now , he runs them like a boss — but only after a learning curve. Offerman previously said he wanted friend Alec Baldwin off Twitter for the most relatable reason 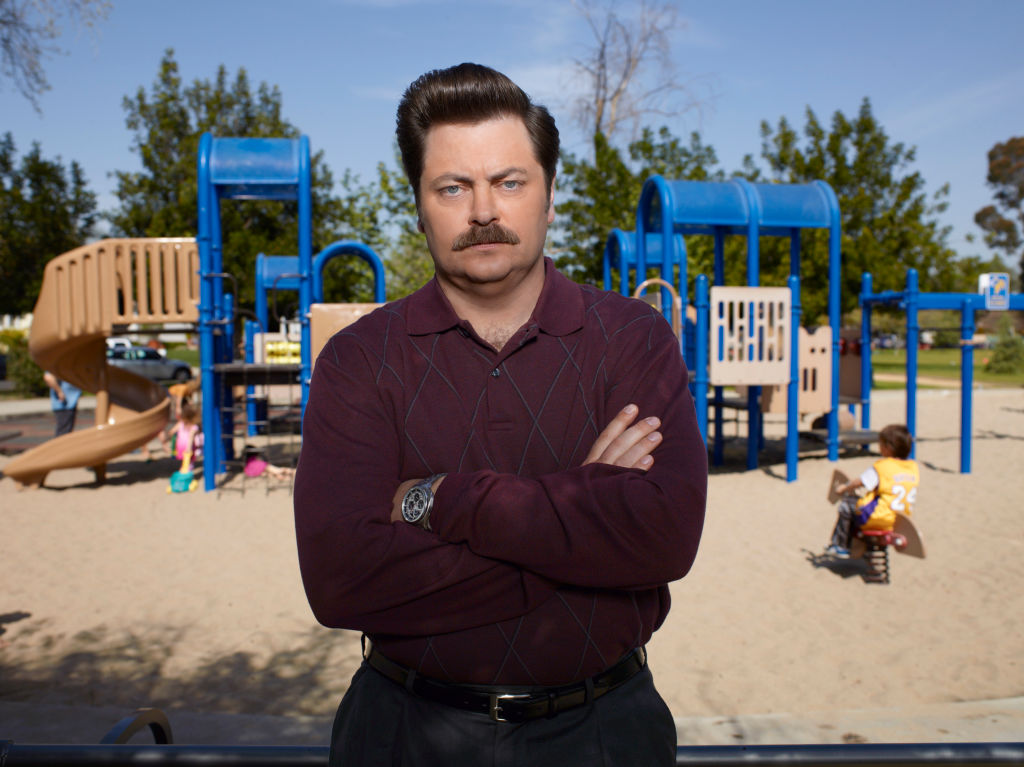 Many who love Parks and Rec want to know how similar Offerman is to his character Ron Swanson. The star explained in various interviews that he’s not much like him at all aside from his woodworking skills and love of top-shelf alcohol. Still, there’s one thing Offerman and Swanson share and that’s their nonconformist views.

“When I was in fourth grade, we were learning vocabulary words, and the word nonconformist came up,” Offerman previously told Believer Mag. The teacher said, ‘It’s somebody who whatever everybody is doing, they do the opposite’. I remember raising my hand and saying, ‘Mrs. Christiansen, I would like to be a nonconformist’.

It’s something the star implemented into his “Ten Tips For Prosperity,” which also includes suggestions like “use intoxicants,” and “avoid the mirror.”

“There’s a lot of common sense to it, which I feel like we have lost touch with,” he said. “If I put down my tweeter machine for a minute, I actually can communicate with people.”

This resonated with Offerman so much so, he’d only just joined Twitter at the time of the interview — in 2012.

Offerman wanted Alec Baldwin off Twitter for a relatable reason

As the nonconformist Offerman claimed to be, joining Twitter so late in the game threw him off in the most Ron Swanson-like way possible.

“That’s the thing. I still hate it. When I signed up, my assistant sent me my user name and password,” he said. “Then it says, ‘Sign up for who you want to follow’. I look at ‘entertainment’. Alec Baldwin. I love Alec. So I sign up for Alec.”

He continued: “By the time I get to the next step, it buzzes and there are thirty-eight tweets from him. The tweets are like ‘Man, Elvis was so cool’, and a link, presumably to something about Elvis. And another tweet: ‘Seriously, check out how cool’. A minute and a half into signing up, I’m like, get Alec Baldwin off! Alec is very much a hero to me, but I don’t want to be receiving his Twitter messages.”

If you’ve been on Twitter, you get it. And don’t worry — the two are still friends.

Offerman has evolved his social media usage over time

Previously, Offerman and wife Megan Mullally chose to avoid social media. They even shared an email address because, “just answering emails is such an insane monkey on my back.” That said, he seems to have matered it over the years.

“I was writing an email to Conan O’Brien and Rob Corddry, who are my two friends with the most followers on Twitter. I was going to ask them to tweet the link to the trailer for this movie I produced,” he explained.

“It occurred to me that my reticence to know anything about Facebook and Twitter was not proper etiquette. It isn’t cool to make your friends go to the trouble of maintaining a Twitter thing and exploit it. It would be like, ‘Hey, you own a series of billboards. Would you mind advertising my product on them?’ If you want to do this, do it yourself. Or shut up,” he said.

Offerman said it alludes to another tip for prosperity: paddle your own canoe.

“It’s been a difficult learning process. I sent one tweet yesterday about watching my wife’s show, which premiered last night,” he said. “I can’t bring myself to do it again. Yet. I feel I need to address the change in policy. I just have to figure out how to do that.”

One look at the Parks and Rec star’s Twitter account and it’s clear he got it figured out and is doing just fine. Ron Swanson wouldn’t approve, but that’s neither here nor there.