“Why Women Kill” creator Marc Cherry discovered there’s more than one way to murder a husband when faced with developing his main titles. In the series starring Ginnifer Goodwin, Lucy Liu, and Kirby Howell-Baptiste, situations of marital infidelity lead to death in three separate storylines across three different decades. Cherry spoke to IndieWire about trying to encapsulate his tongue-in-cheek mystery series without giving anything away in the opening sequence.

“I had never done this before, but I wrote a main title sequence into the pilot. It was just a series of women killing men,” he said. “In my original conception, I had eight sequences. We were going to shoot it live action, but then we were presented with how big the budget would be to kill different men in different eras, and we were going over it.”

“Then one day it just hit me: The whole point of a main title sequence, I feel, is to set tone. And because I have a larger-than-life theatrical tone to my shows, I thought maybe something akin to an animated comic book. When I was young I was reading all the superhero stuff and my sisters would read romance comics.”

The influence is easy to see in both the style and subject matter. The romance comic book genre — such as Joe Simon and Jack Kirby’s 1940s-1970s “Young Romance” series — features passionate love, but also examines how it may devolve into heartbreak, jealousy, betrayal, and breakups. Cherry referred to these types of pulpy comics in addition to pop art to get the feel he wanted from Scatterlight Studios, which created the opening sequence.

Take a look at the main titles:

“I grew up in the ’60s, so what I was really trying was to get them to capture that particular era,” he said. “There’s a little bit of Lichtenstein prints in there, those old prints based on that comic book style. There was something about that old-fashioned style that I was going for, mixing that comedic look with the dire circumstances of various murders.”

Scatterlight used the Ben Day dots to recreate that comic strip/comic book effect of colors and shading. This was also featured in Ray Lichtenstein’s artwork that uses the comic book language to parody and create commentary.

Of the many methods of murder seen in the opening sequence, the bathtub electrocution, the push down the stairs, and getting run over with a car remained intact from the original conception.

“Circling the guy with fire, there was a different version of that at first,” said Cherry. “Then the iron we came up with on the spot because with these sequences, we only have maybe eight seconds or so to show a woman who’s unhappy with a guy and for us to understand why she’s unhappy with him. So I think we came up with […] a man giving his wife an iron on their anniversary. That was the last one we came up with.”

Despite the nod to those ’60s comics and artwork, there’s a significant difference in these main titles in that it also features people of color prominently, reflecting the show’s diversity. “Why Women Kill” offers equal opportunity murder.

“It was something that was brought up early, which is, I think for a lot of people, white characters are the default. And I think we live in a time now where everyone takes a moment to remember, ‘Let’s broaden that horizon,’” said Cherry. “I want people to see themselves reflected in my work. And why should only white women be killing their husbands? I’m sure there’s women of many different creeds and colors who would love to take out the man they married. So I want to honor that.” 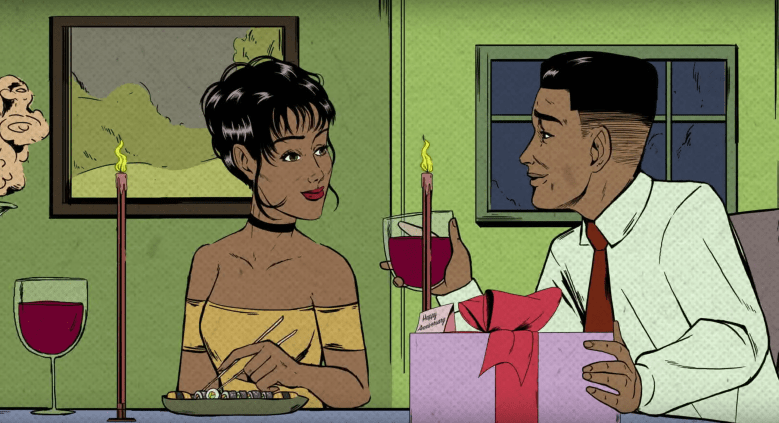 Michael Feinstein’s bouncy rendition of that Nat King Cole classic “L-O-V-E” accompanies all of this killing. Composed by Bert Kaempfert with lyrics by Milt Gabler, the romantic 1960s song that extols the virtues of a lover fits the classic yet facetious tone set by the images.

“Interestingly enough, I had a different song that I wanted for the main title sequence. It was about a woman’s hopeless devotion to her man,” said Cherry. “But the owners of the song, the publishing company didn’t want us to do that song with men being killed because they were afraid it would forever taint that song.

“So then I came up with ‘L-O-V-E,’ one of my favorites,” he continued. “I’m really good friends with Michael Feinstein, so I called him up and said, ‘Hey buddy, you want to be sing the theme song of my show?’ I definitely told him that women are going to be killing their husbands [in the opening sequence]. ‘So you’ve got to play it totally straight.’ I wanted the irony, and he got the joke immediately.”

Although the main title sequence serves as an amuse bouche for the main course of marital murder, none of the characters or killings give clues to the mysteries in the series.

“Once I saw it all put together with the orchestration and everything, I was very proud of it because it really sets the mood and reminds everyone that this is a show about women giving men their just rewards,” said Cherry. “The show is far more complex in terms of what happens and why and, indeed, who is killing who. We have some plot twists in our show that I hope will delight and surprise our audiences.”